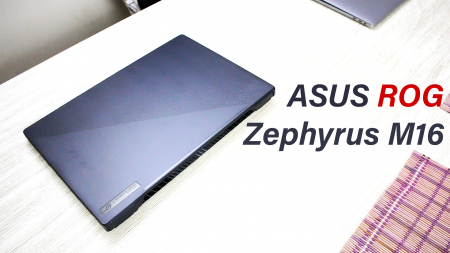 The King is dead! Long live the King! My long serving HP Envy 17t choked on a dosen green screens of death before shutting down for the last time. I did a diagnosis and the HP forums concluded that the CPU was fried. And just like that I had to get a replacement and it’s quite the replacement.

Say hello to the Asus ROG Zephyrus M16. It’s one sleeper of a laptop. Shout out to Gizmo techstore for importing this machine for me. What actually happened is my 1st and only choice was getting an HP Omen 17 inch for obvious reasons but for me to get that one i needed to wait at least 2 weeks.

After some pleading the Gizmo Tech guys threw me a couple other options that could arrive sooner and the last option they threw my way was this Asus ROG Zephyrus M16. And it had beefier specs than the HP Omen I so desired. And they even made arrangements to match my budget. I could not say no to that. 5 days later my Laptop was in my hands. Check them out. Now it’s back to the review!

I love a good understated PC when it comes to design and the M16 is quite stealthy. It’s matte black with some normal looking vents considering the silicon in its shell. The shell itself is made from magnesium alloy which does wonders on weight. The M16 is a whole kilogram lighter than the Envy 17t it replaces. Let’s run the specs.

The typing experience is alright. Took a bit of getting used to in terms of the size of the keyboard and the lack of a num pad to the right. Slight learning curve there. The key press pressure is slightly higher on the M16 compared to the Envy 17t but again it was not too hard to adapt to.

What I do miss is the print screen button because I take a lot of screenshots. I mean I can still do full screen snips using the snipping tool but then I have to manually save the file every time and yet with the print screen it saves as soon as I print it automatically. Oh and the M16 keyboard is a lot quieter when typing than on the Envy 17t which i like up until I realize it does not matter when the fans are running because they can get VERY loud.

The trackpad is massive. Absolutely huge and I think it’s the only input part of the laptop that’s taken me the most time to adapt to. Whilst it works great for the most part, it’s not poor palm rejection so when I was absent minded I was randomly clicking stuff or zooming in and out of stuff or changing windows. Also because it goes so far to the bottom edge it was a bit straining to use I ended up pulling out a physical mouse. Yeah yeah it’s HP but that’s not the point.

Performance is plenty. And it should be said that the Envy 17t was no push over. 8th Gen i7 with 16GB of RAM and 4GB of Nvidia Geforce MX150 graphics. It booted in less than 15 seconds. But this Asus is faster. Which is crazy because everything is so immediate it’s almost like I’m making commands using telepathy. Apps load some 10 to 15% faster, Games load a lot faster here. Somewhere in the 25 to 30% compared to the Envy 17t.

What about the display? I have to say I miss my touch screen especially in Photoshop. That said, it is glorious! It’s got tiny bezels all round, it’s super sharp thanks to the QHD resolution, It’s what I would call bright enough and the colors are fantastic. I mean it supports HDR for some pretty vibrant color, it’s got a lot less light bleed from the backlight. It’s a beautiful panel. Comparable to the one on the 2021 MacBook Pro 16 inch. I mean not as good as the MacBook but close enough to have it as a reference point.

Then there is that 165Hz refresh rate. Super smooth it’s another dimension. However as you can see we may have an issue with my laptop. Unfortunately it came like this out of the box and it seems to be the manufacturer’s fault. So everything is fine at 60Hz but anything beyond that it glitches. I tried updating drivers and reinstalling the OS but no change. It’s been a bit annoying especially in games but for most of my work I have had no issues working at 60Hz.

I didn’t even talk about audio. Again the speakers are fantastic. They support Dolby Atmos and so they can cover you in a blanket of spatial sound allowing you to tell the direction of the sound beyond just left and right. You have up or down and a bit of forward and backwards. And it’s crisp audio too with thick mids and lows and detailed highs.

The creativity in the composition of the music was pretty pronounced. It made me hear stuff I was not hearing before with my logitech system. Again close to MacBook 16 speakers but not really better. If the M16 is a good speaker, the MacBook 16 is a very good set of speakers.

But guys, this is an Asus Republic of Gamers laptop. This means it comes with a lot more buttons in the system that you won’t find on normal laptops. And to access all the shiny buttons you need to just press one. The one with the ROG logo which opens the armory crate.

So many buttons. So much power. The speedo got me hooked trying to get to the red lines of my system. This laptop allows for overclocking which is pretty much running the processors at a faster speed than they are supposed to. This just makes the laptop do things faster or be able to do more simultaneous tasks.

You can tweak the power you send to the CPU or GPU to make the PC more efficient or more powerful or to suit the hardware demands of the program you are running. You can adjust the speed of the fans and how much noise they make. You can see usage stats of all the components like RAM, CPU, GPU, system temps, storage levels. You can even turn the startup sound on or off and change the color of the keyboard backlight AND even make the backlight cycle through a range of colors.

It’s just too much customization. It becomes its own rabbit hole if you start pushing buttons in there. It’s too much for even someone like me. I mean I am not the specimen for an absolute power user so I know there are a group of people that will do justice to all these customization options and create several profiles suited to several individual use cases.

The Asus ROG Zephyrus M16 is an absolute gem. I love the understated design. Unless you know it, it will look like a normal laptop. It’s got so much performance the bottleneck is pretty much me the user. It comes with some cool perks like a month free of Xbox game pass and a lifetime pass for Dolby Headphone enhancement.

The experience is quality ignoring the Windows 11 bugs from Microsoft and it’s both light and compact enough to fit in my backpack. The display is glorious. It’s sharp, vibrant, bright and color accurate and I hope I can get the flickering sorted when I go beyond 60Hz so I enjoy it even more.

This is my 1st time owning a laptop that’s not an HP and so far I am a happy man. Again thanks to Gizmotech Zim for hooking me up with this laptop. It was not cheap. This particular one with this spec was US$2690. My wallet is still recovering from that but with how it performs and feels It’s making up for it and it should pay back for itself.