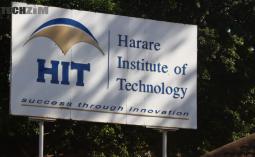 Apparently, the Harare Institute of Technology (HIT) is developing a central bank digital currency. HIT Vice Chancellor Dr Kanhukamwe revealed this at the graduation ceremony held at their campus a few days ago.

This raises a lot of questions. We have covered what central bank digital currencies (CBDCs) are and you will recall that they are essentially just a nation’s currency in digital form. It is the central bank that is liable for the currency.

The govt does not take kindly to those who would mess around with currencies. Try announcing you are working on a currency yourself and see how quickly you will be shut down.

Could this mean the Reserve Bank of Zimbabwe is working with HIT to develop a CBDC? Could be.

What we know is that the RBZ seems serious about CBDCs, even having a roadmap for deployment. We are still waiting for the consultation paper they said is coming.

Selling the President on CBDCs

At the HIT ceremony where they revealed that they are working on a CBDC, the President was in attendance and the HIT VC sold him on the benefits of CBDCs. At this point, I’m convinced that we will be seeing a CBDC in this country. Here’s what the VC had to say,

…It has the capacity to reduce significantly the regulatory costs for central banks thus reducing the transactional costs that will ultimately reduce the costs of service. As a result, there is significant reduction in fees.

Therefore banking the unbanked will boost the business for the small and medium enterprises as they increase chances of ordering finance. The technology will reduce the printing of money as we work towards a digitalised economy by 2030. Digital currency has the capability of eliminating currency manipulation, hoarding and fuelling of black market currency trading.

That was a brilliant pitch by the HIT VC. He knew his audience and said all the right things. President Mnangagwa’s administration has often complained about economic saboteurs manipulating currencies and crashing our beloved ZW$. So, to tell him that CBDCs are the solution he has been looking for is brilliant.

I imagine the RBZ governor got a call after the HIT ceremony along the lines of, “Iwe Jonso taapapi nezvimaCBDC zviya?” I too wonder where we are with those CBDCs.

It’s a good pitch but is it true?

He says CBDCs will help eliminate currency manipulation. That is possible. With CBDCs, the RBZ will have more extensive data on the movement of funds in the economy. This should make it easier to spot any anomalies.

This greater oversight by the RBZ scares me a bit too. It can be misused. It’s a double edged sword, the RBZ getting greater control could help in coming up with and tracking progress of monetary policies. On the other hand, we are talking about more control for the RBZ. Do we really want that?

We talked about these matters before. If you don’t know what those CBDCs are all about, the following articles should get you up to speed.

Zim govt looking at central bank digital currency, what is that and why won’t it fix our problems

The RBZ invites dialogue on coming digital currency (CBDC), you have to be a part of this