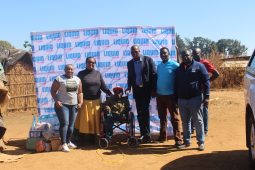 Who said being a techie meant you can’t relate with human feelings???

Liquid Telecom, a data, voice and IP provider in eastern, central and southern Africa did not only supply fibre optic, satellite and international carrier services today, but rather ventured into a different field altogether – wheelchairs. Well, maybe wheelchair is the proper term right there since it was a wheelchair donated to one individual.

Interestingly, the project was not really part of this year initially. However, Ms Elizabeth Mamukwa – the head of Human Resources and Administration at the telecoms company on one random day met Benjamin (the recipient) who was having difficulties in moving about because of his old wheelchair. She then decided to submit the idea of helping him to the company which gladly accepted the task.

A team of 5 individuals from Liquid Telecom visited Benjamin’s home in Borrowdale (behind the race course) today to deliver the wheelchair along with some other essential groceries for Benjamin. Unfortunately, because of his condition, he is unable to cook or do other chores for himself. However, it’s a good thing to know that there are people who are humane out there, Benjamin was ‘adopted’ by another family which also got to receive some groceries from the company.

Here are some of the pics:

In Ndebele they say “into enhle iyabukwa” which basically means good things should be appreciated and likewise we have. Hopefully, this is only the beginning of such charitable works from the company and of course we look forward to seeing more tech companies coming on board and doing the same – the world needs that!