WhatsApp could be getting ready to expand its fight with fake news with a new ‘Search Image’ feature. According to a report by WABetaInfo, the Search Image feature in WhatsApp will allow users to search for a selected image on the internet. 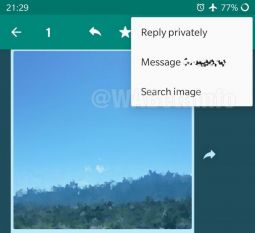 This feature, powered by Google Search, will upload the selected image on Google and perform a reverse image search. This would essentially help users to track down the source of the image, and in theory, help combat fake news, if any. For example, if someone sends an image in a chat, you can use the search image feature to look for it on Google and confirm if it is real or fake.

Fake news has been a growing problem across the world. With WhatsApp being used by over a billion users daily across the world, spreading fake news has never been as easy. Earlier, WhatsApp had rolled out message forwarding limits globally in a bid to fight fake news. The Facebook-owned app had also partnered with some local newspapers, even here in Zimbabwe, to preach its sermon on fake news.

When you tap on the ‘Search Image’ option, you will receive a notification saying that the image will be uploaded to Google. You can confirm or decline this action. If you agree, then WhatsApp will search for the image on Google and present you with some results. The company will use Google’s API’s and then show the results in your preferred browser.

Although this feature may not be enough to dissuade people to spread fake news, it will somewhat offer users another tool (on top of some features WhatsApp has introduced) that helps them to judge whether a certain message is fake or not.