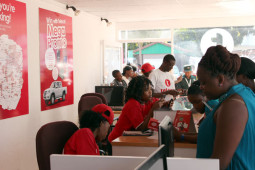 The problems engulfing Telecel at the moment don’t seem to have a clear resolution in sight. A fortnight ago we wrote about how the company was still bleeding customers at a frightening pace. It seems in addition to having to deal with subscriber loss, board room squabbles and investing in infrastructure, Telecel is also looking at a disenchanted workforce.

The Telecel employee we contacted to confirm the protest only said “they were not aware of it” and not that it didn’t or did happen. We also contacted Telecel’s brand manager but at the time of publishing they are yet to respond to our request for comment.

Considering the state of affairs at Telecel at the moment, it wouldn’t be too surprising if the protest took place. Back in January, Telecel employees wrote an open letter to the government pleading for it to intervene. In the letter employees raised concerns regarding falling revenue figures and subscriber numbers.

A few months later it was revealed that Telecel employees had received a salary cut unannounced and they had received the money via Telecash instead of their bank accounts.

What is Telecel doing to fix the mess?

Well, there is a “famed” turnaround strategy. Well, that’s what Telecel and the Ministry of ICT have been saying but we’ve attempted to get more details regarding this strategy from both the Ministry and Telecel to no avail.