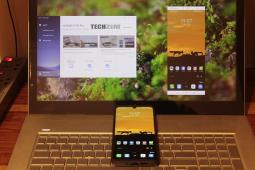 It all started with a madman but it seems the after-effects of Donald Trump’s Huawei ban are going to outlast his presidency. Although we have a new administration in Washington it doesn’t seem like President Biden is in a hurry to lift the Huawei ban even though he was quick to roll back things like the withdrawal from WHO and Paris.

Maybe he is distracted by the COVID-19 pandemic but it seems America’s unease with China could be a bi-partisan thing. And it’s about to get a bit worse for Huawei phone owners. The nerds at XDA recently did a teardown of the upcoming Google Messages APK update and made a startling discovery. If you are wondering what an APK teardown here is what XDA has to say about it.

We routinely decompile APKs (the file name for Android applications) and look for interesting things. APK teardowns can reveal lines of code that tell us about features that will be coming to the app down the road. We interpret these lines of code and make educated assessments about what they mean.

Last week XDA took a deep dive into the upcoming Google Messages update and discovered a string that seems to suggest that in the very near future only Google Certified (Google Mobile Services) devices will be able to use the Google Messages app. This can happen as soon as April 2021. When the update comes any non-Google Certified device will throw an error that says their phone is not certified. This includes all those very expensive Huawei phones as well as a lot of other Chinese phones that are a dime and a dozen in Zimbabwe.

A few days later XDA discovered similar indications within the upcoming Google Duo app. There was a similarly worded string in the decompiled APK. This means those who want to use the video chat app have to have a Google certified phone otherwise they see an error. Again this means the door will be shut on Huawei and “China” phones when the update comes. Those on such phones will soon see the following message:

Duo is going away soon.

Because you’re using an unsupported device, Duo will unregister your account on this device soon. Download your Clips and call history to avoid losing them

Who cares about Messages and Duo anyway

To be honest, losing Google Messages and Google Duo is not a big deal to Huawei phone owners. These apps are easily replaceable when it comes to functionality. It’s like losing the Gmail app, there are plenty of apps out there with similar functionality and feel. It’s not as devastating as losing Google Services for example.

Losing Google Duo might be a concern if you depend on the app during this lockdown period. Personally, I love Google Duo and while everyone has been ranting and raving about Zoom, I have been gushing about Google Duo, seriously you should try it. Zoom cannot even begin to match Google Duo’s video and audio quality on slow internet connections like ADSL and Home LTE connections that come with limited upload speed. The results are amazing while Zoom is shaky at best.

If you work for a business where Google Duo is the preferred video calling and meeting app losing it may be an annoyance that might see you need a new phone. Very few Zimbabweans would care about losing Google Messages as it’s just a matter of installing a new SMS app. In fact, you probably don’t even need to install anything, your favourite spying app Facebook Messenger already does most things Google Messages can.

Google was the best thing that ever happened to Android. Without Google, it’s doubtful the operating system would have been popular. It’s probable that like all its Linux brethren it would have been stuck as a middling offering on the wrong end of the nerdy scale.

To complete the paradox Google is also now turning out to be the worst thing that happened to Android. While in theory, Android is a Free and Open Source Software initiative more and more critical aspects of it are being internalised by Google in a disturbing trend that leaves the open-source portion of it pretty much useless.

Take for example the upcoming Android TV versions that show that Google is intent on strengthening its stranglehold in that market. The Android TV launcher has been replaced by a Google TV launcher that glosses over everything. Soon it won’t be Android TV, it will be Google TV as Google replaces more and more opensource aspects of it with Google proprietary software. Soon content providers will only be developing for Google TV.

The problem comes when we have a situation where Google after scaling the crest decides to push other players off. The Huawei ban is just an example of how the company is now an undisputed kingmaker. Just by withdrawing its software, it was able to do a lot of hurt to Huawei a multi-billion dollar. What chance does a small phone maker have?

I actually hope Huawei is successful with its new Harmony OS. We need more manufacturers to counterbalance the current hegemony that Google (and Apple) has over the smartphone market. If the grip is not loosened we will not be safe and Donald Trump demonstrated that with his bans. There is a need for competition otherwise the longer Google’s monopoly holds the hard it will be to wrest free.

At the moment Google doesn’t charge anything to allow phone makers into the Google Mobile Services (GMS) program but if it starts to charge an arm and leg phone makers will have no choice but to pay up. Even it starts making onerous demands so one can stay in the program phone makers have to bent to its will.

For example, Google might demand that companies in the GMS cannot sue Google for patent infringement or cannot compete with Google in certain areas. Already you are required to preinstall Google Apps if you want to be certified further solidifying Google’s monopoly position and bringing in revenue for the giant.

2 thoughts on “It’s about to get worse for Huawei, they will soon lose more Google apps”