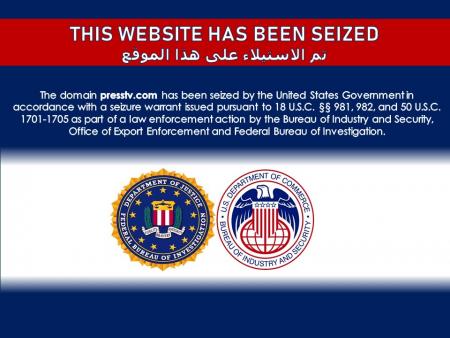 In a controversial move, it seems the United States government has seized domains belonging to Iranian affiliated news agencies. Right now if you try to visit Presstv.com you will be greeted by a seizure notice, an FBI and the US Department of Commerce seal. This is just one domain name of many such news related domains that the US government has taken offline.

Who is Press TV and their associates

Most Zimbabweans switched to Philibao and Wiztech free to air decoders during the economic crisis known as 2008. We couldn’t afford to pay DStv anymore and even if you could the foreign currency black market was not as established as it is now. One popular channel on the FTA buffet was Press TV. It’s a channel that a lot of Zimbabweans who lived through this era are at least familiar with.

Press TV is the Iranian version of ZTV. Apart from the slick picture quality that would put ZTV‘s to shame, there are relatively few differences. It’s government-owned and jingoistic, very conservative and an unfiltered government mouthpiece. Opposing views are not given airplay even though the station and its affected affiliates are state-funded. In fact, all public media in Iran is owned by the government who use it to push their narrative and agenda unopposed.

Iran has also banned most conventional social media sites although tech-savvy youngsters often circumvent the bans using VPN. You will not get into trouble in most cases until you of course become a pain in the regime’s side. Then under one pretext or another, they will haul you in and you might even be executed.

Back to the shocking US move

It is also known that Iran and the US are at loggerheads and their relations plummeted under Donald Trump. In a move that is so typical of Trump, he shredded the nuclear deal signed under Obama but had little to offer by way of alternatives. Ever since then and even before that, Iran news outlets like Press TV have been used to spread propaganda against the U.S.

It seems the seizure of these domains is in retaliation to that. On the surface, it appears justified but the implications of such a move could be far-reaching. In this instance, the U.S took advantage of the fact that .com domains are administered from its territory by a US company-Verizon. The only reason why these domains are down is that Iran is a rival of the United States and that should send alarm bells ringing across the web.

Essentially what it means is that if the US doesn’t like what you have to say you risk losing your .com or other US-based domains! It doesn’t help that the U.S government has not communicated the reason why those domains have been seized either but it has to be under some sort of pretext such as the domains were bought by circumventing sanctions. It will not change the reality that this would just be a pretext to seize foreign-owned domains.

Again there is the temptation to think that this is an isolated incident that doesn’t concern the common man or Zimbabweans. However, you have to remember that even our government is often at loggerheads with the US government and several of its personnel are on the OFAC list. Those who have attempted to venture into cross-border payments using PayPal, Visa, MasterCard, Stripe or cryptocurrencies know how easy it is for common people to get caught up in such squabbles.

What is to stop the US government from waking up one day and seizing .com domains owned by other companies, governments or even individuals? Most people don’t realise this but despite the distributed nature of the internet, key parts of it are in the hands of a few organisations and countries.

A good number of these are located in the United States where the internet originated. All we need is another Trump minded president/government who want(s) to switch off the internet and we are in trouble. The world is increasingly becoming polarised but communication infrastructure must remain neutral until a crime or breach, according to international law, has occurred.

Press TV is in essence another version of Fox News. They are one and the same in terms of the way they behave and their partisanship. I bet you the vitriolic, Islamophobic material that comes out of Fox news rankles the Iranians the same way those in the US government are annoyed by Press TV.

The liberal and unrestrained version of the internet must be protected from government whims otherwise the internet we know and love will become nothing more but a splintered collection of national intranets. Countries like Iran that tend to be repressive will benefit more from that. It’s an outcome that will harm everyone and benefit demagogues. The U.S is shooting itself in the foot and everyone else in the head here.

Iranian sites have moved to .ir (Iranian) domains from where they can be accessed.