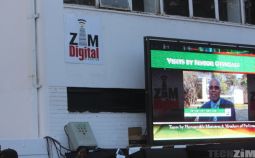 *sighs* Digitisation and ZBC… It’s a seemingly never-ending story and every year since 2014, ZBC has been promising that they are close to digitising. The most recent update from the national broadcaster claims that the job will be completed by the end of this year.

It’s not entirely clear if the deadline will be met, because on multiple occasions prior to this one, deadlines have been announced and missed. The CEO of Transmedia, however, is suggesting that the larger part of the job is complete and ZBC only awaits set-top boxes:

I am happy to report that at the moment, we have almost 18 sites that are ready so as soon as we have the set-top boxes, we can let our people view the digital signal. So the only missing component at the moment is the set top box. The towers are ready and all the machines are ready, the studios have been revamped and we have enough content at the moment for ZBC. We can assure you we are moving across to the digital platform before the end of this year.

The only issue that’s left is apparently that of set-top boxes. Now let’s talk about why some (including myself) have some doubts, even though there are some positives that could mean the progress is being made…

As far as I can tell, digital migration or digitalisation in ZBC dates back to 2015 (correct me if I’m wrong). Here’s a timeline of the progress (and lack thereof) made since:

Given that hard-to-ignore list of headlines, it’s a bit difficult to take announcements about the completion of this project seriously but there have been some events over the past few months that give hope…

The national broadcaster has since spruced up their studios as claimed by Transmedia CEO. ZimDigital hosted content creation training workshops in anticipation of the new channels. ZBC also launched an application, which receivedan extremely hostile reaction, but that’s besides the point.

The point is there have been some changes at the National Broadcaster over the last few months and those changes make me a bit more hopeful that the nation is not being taken for a ride when ZBC says something is happening on the digital migration front. Now, we wait and see.

5 thoughts on “ZBC Says Digitisation Will Be Complete By Year End. We’ve Heard This Before…”