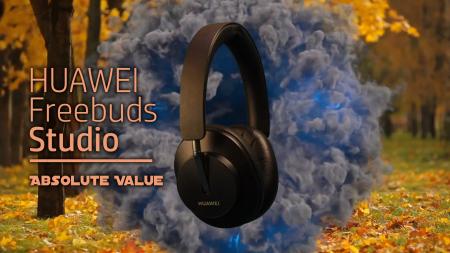 Huawei is building its ecosystem of products and services and recently they released their first ever premium wireless headphones. These are supposed to battle it out with the likes of the Sony WH-1000XM4s, the Bose NC700s and Apple’s Airpods Max. So are these US$268 headphones worth it? You can watch the video version of this review in the link below.

They come in a massive box which has some massive weight to it as well and inside is a pretty neat package consisting of the hard shell case with a Huawei logo in the middle and below it, a package full of paperwork.

In the case are the headphones themselves which come in 2 colours. The black I have here and also Gold. The cushion on the band and cups is nice and soft and wrapped in some protein leather. The cushions on the cups are a bit shallow though so comfort wise they are not the same sort of pillows I got from the Sony MDR-XB950B1s which I shall use a lot as a reference point with these headphones.

The cups swivel by about 120 degrees so 90 degrees in one direction for packing them flat into the case and 30 degrees in the other direction for a more comfortable fit when wearing them. The stems holding the cups are made of metal and they slide smoothly in and out. It’s much nicer than the ratcheting system that the Sony headphones used. It feels super premium. And again there is a bit of tilt that the stems allow so that you get the perfect fit on 2 axes.

The right cup has a lot more stuff. There is the bluetooth pairing button and the power button completing the trio of buttons. But this cup also has the USB-C port for charging the headphones as well as a touch sensitive space for the rest of the controls like volume, track skipping, playing and pausing and answering or rejecting calls as well as summoning your voice assistant.

The Huawei branding is also on both sides of the cups and I am curious how durable the branding on the right cup will be with a finger constantly rubbing on it when performing the many frequent gestures. But overall, the build quality and materials look and feel top notch.

It’s pretty simple to pair them. All you do is turn the headphones on and press the bluetooth button for 3 seconds to get it into pairing mode then scan for bluetooth devices on your phone or tablet. You’ll see it pop up and click the pair button.

For you to be able to tweak the settings on the Freebuds you will need the Huawei AI life app if you do not have a Huawei smartphone. In the app you can run software updates for the headphones, cycle between the different ANC modes and customise or disable gestures.

You can also choose an EQ preset, turn smart wear detection on or off which just pauses whatever you are playing when you take off the headphones and also how long the headphones stay on after you have removed them.

Enough with the pleasantries. How do these headphones sound? One important point I need to say is that when buying headphones make sure that you give them some time to break in. When I used these headphones out of the box they didn’t sound good. In Fact for the first week I used them they couldn’t even compare to my Freebuds 3 which made me worry.

2 weeks later I can tell you I am happy I was patient. The Freebuds Studio sound the way I expected them to. The sound stage is balanced with warm and creamy bass and crunchy crisp highs. They are very versatile, being able to perform in spectacular fashion in both orchestral tracks where good resolution is needed for symbols and snares but also in my South African house music where the bass line can overwhelm the mids and highs.

The Freebuds Studio were flawless in either scenario and everything in between. They might not be able to go as low and hard on the bass as Sony headphones but believe me when I say they are close enough. Which is a fantastic comment considering just how amazing Sony is at making audio products.

The audio integrity stays true throughout the whole volume range. No distortion when the bass drops or when the orchestra gets to that crescendo except when using noise cancellation in a loud environment at max volume. That produced a bit of a rattle in the drivers whenever the bass dropped.

That said, they genuinely sound a lot better 2 weeks later. I set the Freebuds 3 as my benchmark and the Freebuds Studio have done me proud. If you are going to buy these please give them a 2 week grace period for the drivers to loosen up and you will absolutely enjoy them.

In terms of comfort. The cushions are soft and so is the protein leather. It’s currently winter in Zimbabwe as I am making this video and not much sweating is going on so I did not have any issues with my ears overheating or sweating.

However the cushions are not as deep as I would like so the most protruding areas of my ears would slightly press against the fabric covering the drivers which reduced the time I can keep them on comfortably. It was not too bad though but after 4 or so hours wearing them I started feeling that slight discomfort.

Bluetooth range is super impressive. I had absolutely no drops in signal anywhere in my yard. I would forget my phone in my room and go do stuff outside and everything stayed stable even with up to 4 walls between the headphones and my phone. It definitely takes the crown for me there. I have never had any bluetooth accessory with that much range and stability.

In free space I got up to 40m away from my phone and the connection remained rock solid. What showed me how good the range on the Freebuds Studio was is my watch which was disconnected from the same phone because it had exceeded it’s bluetooth range.

So in free space the Freebuds Studio have a range of at least 40m tested by yours truly.

Battery life is rated at 24 hours with ANC off and a 10 minute charge can get you up to 8 hours of audio playback also with ANC off. Charging is done via a USB-C port and it takes an hour for the headphones to charge from dead to 100%. Quite a step up from the 4 hours that the Sony MDR-950B1s took to charge and only lasting 18 hours. It’s quite refreshing.

Let’s talk about features. Starting off with ANC which stands for active noise cancellation. It uses built in microphones to listen to outside noises and use that to produce an opposing sound that it mixes with whatever you are listening to and this eliminates the noise.

The Freebuds Studio have 4 types of noise cancelling.
Dynamic listens to what’s going on in your surroundings and adapts to the situation.
Cozy mode is some light noise cancellation for use in quiet environments for removing the noise of aircons and computers.
General mode is a bit stronger for more noisier places like restaurants and cafes.
Ultra mode is for even louder environments like workshops, planes or buses.

There is also transparency mode which uses the microphones to pick up external sounds and pump them into the headphones so you can clearly hear what is going on in your surroundings whilst you listen to whatever you’ll be listening to.

Initially for me it felt very weird the first 5 minutes I had it on. It felt unnatural for me to be able to hear so much and so clearly with some cans covering my ears but after that it felt alright. And it worked a treat so long the volume was 50% or less. Above 50% the audio I was playing just had a lot more volume than my surroundings and so unless what was going on around me was pretty loud as well, I was not able to pick it up even with transparency mode on.

There is also a voice enhancement mode in transparency mode which also did a pretty good job boosting human voices. I have no reference point for this feature but I could tell the difference when the option was on versus when it was off.

It’s got Bluetooth 5.2 which offers some good low latency performance and I could tell when watching videos that the delay was a lot less than on my Sony’s which had Bluetooth 4.2. It’s not as good as using a wire though but you’ll only notice that if you absolutely look for it. Otherwise general users won’t even notice the difference.

And finally these headphones support dual pairing so they can be connected to 2 devices at the same time and operate seamlessly. So if I am using them to edit videos on my laptop and I receive a call, they will automatically switch the audio source from the laptop to the phone.

Nothing is perfect in this world and there are a couple of issues I had with the Freebuds Studio. The touch controls had a tendency of occasionally not responding and I had to restart the headphones to get them to work. When the touch controls failed, the headphone removal detection also didn’t work and again it needed a restart to get it working.

I also had glitches where when I cycled between the different ANC modes, the headphones would disconnect from the phone. It only happened once so maybe it was an isolated event but I have only used them for a week. Also all these seem to be software related issues that can be sorted out via updates.

But some compromises cannot be sorted out by updates like the lack of a headphone jack. I know a lot of phones don’t have one anymore but I do prefer having that option when using them to edit my videos.

The other is there is no NFC one touch pairing. I loved it in my Sony’s because I would just tap my phone on the right cup and the headphones would automatically turn on and pair with the phone. I am not sure why they did not include this one since they were already halfway there.

The Huawei Freebuds Studio have a lot going for them. They are packed with features, they have a very lovely design, they are comfortable enough and they are competitively priced. I mean yes when I got mine they only cost me US$268 because they had a 10% discount but even without the discount of 26 dollars and 80 cents, they are cheaper than the 500 dollar Airpods Max from Apple, the US$400 WH-1000XM4s from Sony and the US$380 NC700s from Bose.

Overall they are massive value for money headphones for someone looking for either a casual audio experience or for the noise cancelling chops that it does a very good job with. For the enthusiast in me however. I buy my audio accessories for a particular sound signature and it pains me to say that the Huawei Freebuds Studio don’t have that particular sound signature. They are really close but not close enough to end my quest for the Sony WH-1000XM4s.