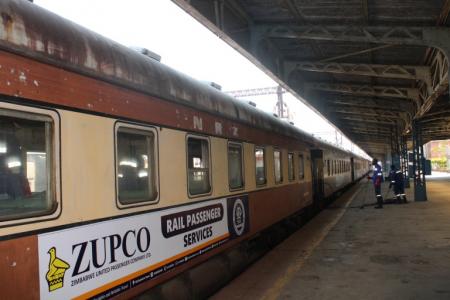 According to Information Secretary Nick Mangwana, the NRZ and ZUPCO partnership is now running a route in Bulawayo.

BULAWAYO
NRZ-ZUPCO Cowdry Park commuter train has been launched this evening in Bulawayo. The train services will help ease the transport challenges commuters have been facing. #NDS1#EDTheGameChanger

BULAWAYO NRZ-ZUPCO Cowdry Park commuter train has been launched this evening in Bulawayo. The train services will help ease the transport challenges commuters have been facing.

Some time ago the Zimbabwe Passenger Compay (ZUPCO) announced that it was commandeering the National Railways of Zimbabwe’s (NRZ) passenger trains to service inner-city routes in Harare. These trains were in response to the transport crisis that was exacerbated by the outlawing of the independent operators locally known as m’shikashika and kombis.

The former was banned outright and it is not uncommon to see Police officers posting up at hot spots with spikes in hand ready to apprehend them. The latter however was absorbed into the ailing ZUPCO organisation. Both measures got a cold reception from both the public and operators. This led to ranks and terminuses filled to bursting with commuters who couldn’t get transport.

The trains were brought in to offset this because they can carry more people depending on the cars hooked up. However, as far as we know the service was only in Harare with arrangements for Bulawayo being made.

It appears now that Bulawayo at least now has an NRZ ZUPCO train service although in the grand scheme of things this is papering over the cracks. Zimbabwe’s transport sector is now solely owned by ZUPCO which is counterproductive to fair competition and giving the consumer the right to choose which operator they want to use.

Moreover, ZUPCO is still far below capacity to fully meet the need bringing further confusion as to why the government is adamant to have it as the sole operator instead of finding solutions to incorporate independent transport operators.