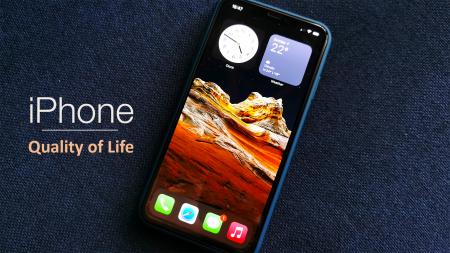 So this is 1 month of owning the iPhone and this happened. I dropped it on my HP laptop and it left 2 dents…on a metal laptop. The phone is fine but a moment of silence for the tempered glass that had to break the fall.

This is no joke my 1st time actually using an iPhone. I mean I have played around with Apple products before but for a few minutes at a time at best. This XS Max is me taking a bit of a dive into iOS and yeah it definitely has been a learning curve.

Stuff like gestures is similar to Android but not the same. With Android swiping from the left or right edges send you back a window or exits the app. On the iPhone you can swipe from the left edge to go back but it only works in some scenarios, not all of them. And you cannot use the edges to exit an app. only the swipe from the bottom up does that. The right edge does not work for navigation.

Interaction with the UI is another. In WhatsApp I was failing to mute a batch of groups at once. Maybe I am a complete tool and could not find that feature but yes I muted 35 groups one by one.

Some of the common apps look different as well. Facebook and WhatsApp in particular. The button arrangement and placement on the Android version of these apps is different from the iOS version of the app. So since I sometimes work on muscle memory I had a couple of moments when I pressed stuff I did not want to press.

Oh and while on the subject of apps. Some games have not been adapted to the taller aspect ratio on this generation of iPhones. They are still using the 16:9 aspect ratio that you see on the iPhone 8 series going down. I mean yes it may be out of Apple’s hands and probably it’s down to the developers of those games to add support for these new aspect ratios but it’s something you won’t see very often in the Android world.

Toggles. Oh man those ones did a number on be. So bluetooth and wifi. If you switch them off in the drop down window, they don’t actually switch off. They are temporarily disabled and after some minutes they will turn back on automatically. To properly switch them off permanently you have to go to the settings and do it there. I think 3D touch should have brought this option to the drop down shortcuts.

I also found it weird that comprehensive camera settings are actually not in the camera app but in the device settings. I found that a bit odd and inconvenient.

So I am big on video and even more on photography. I felt the lack of a pro mode or manual mode in the iPhone’s camera. Some of the videos I film on Techzim I actually film using my Huawei P30 Pro. Like the most recent one where I went window shopping in a Xiaomi store.

Having simple manual control over even just the focus goes a long way towards allowing me more creative control on how I film. Relying on autofocus made me always choose the Huawei over the iPhone even though I knew the iPhone can take better quality video. I just cannot tolerate focus hunting.

The headphones in question are the Sony WH-1000XM4 and they support a high resolution codec called LDAC which can push more audio data between the phone and the headphones. But the phone has to support this codec which the Huawei P30 Pro does but not the iPhone Xs Max. It tops out at AAC which again could be the reason why i was getting better audio quality on my headphones with the Huawei. So my Huawei is still my media consumption device of choice.

Paying through the nose for accessories

And accessories. Jeez! So for Airpods Pros I was quoted 300 USD. For buds! A USB-C fast charge brick. Just the brick with no cable. I was quoted 45 USD. The USB-C to lightning cable? 40 USD. The only affordable accessories I got for the iPhone was a cool 10 dollar case with a built-in foldable magnetic kick stand and the 5 dollar glass screen protector…which fought a good fight when the phone attacked my laptop and i replaced it with an $8 privacy version. I’m still using the 5W charger and cable that came in the box. Yeah Apple made me understand that I am actually poor.

I just realized I have been on a rant since the beginning of this video. I promise you there are some really good experiences I had with the iPhone. If I am to put words to it I would say some quality of life experiences.

I’ll start with the display. It’s OLED with a slightly higher pixel density than the one on the Huawei. I prefer the calibration on the iPhone. The vibrance is toward a more natural look and the gamma levels are in check so at any brightness the intensity of the light is a bit easier on the eyes than on the Huawei. It’s minor differences but the iPhone has the edge. You’ll get much less eye fatigue with it.

The XS Max has stereo speakers. They are a good set of speakers. I don’t know what sorcery Apple used here but they sound bigger than they look with full rich sound and a good bit of low end. And they get pretty loud too. Huawei stood no chance with it’s mono speaker. Infact, whatever Apple lost to the Huawei with wireless audio it more than made up for it with a good set of loudspeakers.

Yes. A whole section for the vibration motor

Haptics. The Huawei has a pretty decent vibration motor. But man Apple is just in a league of its own. Yes I am about to go at length on the intricacies of the iPhone’s taptic engine or vibration motor because it feeds a lot into the quality of life experience that Apple has.

The vibrations are very tight and precise. Precise in terms of distinct pulses but also, more importantly precise in terms of being perfectly in sync with whatever process is triggering it. Whenever Face-ID recognises your face there is a satisfying quick vibration.

When playing around with 3D touch it actually feels like you are pressing a physical button the way the vibration kicks in. And in some cases the vibration matches the pitch and intensity of the tone with such accuracy you struggle to tell if it’s the speaker playing the tone or the vibration motor. I felt this particular one when using FaceID to verify app installations in the app store.

And because it’s such a good vibration I appreciated it a lot in other scenarios. I was increasing screen brightness in Netflix and as soon as the slider hit max brightness there was a gentle tap to inform me that the slider ends here. Same goes for the ringer volume slider and screen brightness slider in the shortcuts curtain. Subtle taps when you get to the minimum or maximum points of the slider. It’s something I miss when I move to the Huawei because in many cases I don’t get those good vibes to inform me of my limits but also when I do, it’s not as tight or as precise a vibration as on the iPhone.

Some well thought out features

Oh and on these ones with a face-ID, it can actually see if you are paying attention to it…the phone that is…and if you aren’t it will turn off the screen even before the set timeout period has elapsed. And if your eyes are closed or not looking directly at the phone, face-ID will not unlock the phone. Quality of life stuff.

Yeah I made quite the rant on how absolutely expensive iPhone accessories are but you do get quality stuff. Stuff that feels like it was made for the phone. The finish alone is just fine craftsmanship. The gaps and edges are uniform. The tolerances are nice and tight and so the user experience itself and the ecosystem of accessories just complements the whole quality of life experience.

And I guess that is the theme for my experience with the XS Max and the little bite of Apple I have got. For the kind of pros looking for as much creative control on their hardware as they can, the iPhone is not going to be their first pick. But these enthusiasts are just probably 5% or less of global smartphone users.

The other 95% of smartphone users out there are looking for something that just works. They expect their phone to deliver consistent performance with the least amount of hassle. Specs, manual controls, bags of customization options. They want none of that. They want quality of life. And quality of life looks like Apple’s specialty.

15 thoughts on “Android to iOS. Is the learning curve worth it?”