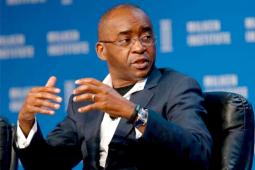 Econet Wireless has announced that their billionaire founder, Strive Masiyiwa, has stepped down from the board of directors of the ZimbabweStock Exchange listed Econet Wireless Zimbabwe Limited.

Masiyiwa had been on the board since the founding of the company although he has not been resident in Zimbabwe for many years.

Announcement given to ZSE.

What started with Econet for Strive Masiyiwa morphed into a truly gigantic empire. In all this, Econet no doubt remained dear to him, being the first child of sorts. The man has so much on his plate now and I imagine that’s why he is stepping down now. The Econet boat seems steady enough, even as he has been physically absent, the company has thrived.

Also, being a major shareholder, he will retain control over the board through strategic board appointments. Not to worry for him in that regard. Remember he is not on the EcoCash board but his daughter is on there, and you can bet your bottom dollar that their visions for the company align quite well.

We recently found out that Masiyiwa was appointed as a member on the Bill & Melinda Gates Foundation board. I guess as a billionaire, now he can focus on that and other work that’s truly in his heart. The man does have other philanthropic enterprises and so his time will be well accounted for.

What do you think of this new journey for Zimbabwe’s richest man? Will Econet survive without their founder? Does this mean he is satisfied with the current leadership and succession policies to be hands-off like this? You let us know what you think in the comments below.

38 thoughts on “Breaking: Strive Masiyiwa retires from Econet Board”