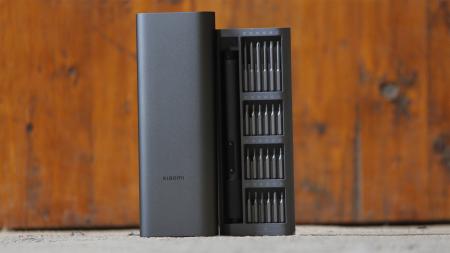 I am a tech head which naturally means I am also a tinkerer. I literally repair all my stuff and I have been for a while now. This little toolkit has been a big help. My trusty screwdriver set since 2016. I’m not gonna lie it was super cheap, something like 5 dollars or so and the quality was dodgy but regardless it did the job.

Then there’s this one. A Xiaomi electric precision screwdriver kit and the box is heavy for its size. There is real metal in there. Essentially it’s a case with 24 bits for 24 different kinds of screws and a 2-speed electric screwdriver.

So to test it out we will be taking apart some stuff. Essentially 3 phones, one from the late 90s, another from 2007, and another from 2012. I’m going to start with the new one. Because why not?

353g is the weight of the contents of the box which is a bit more than the 258g of the Huawei Mate 40 Pro, a pretty heavy smartphone. As much as this set has 24 tips which are plenty, my old one has 32 which is 8 more tips than Xiaomi so I can definitely unscrew more screws with my old toolkit.

All these tips are enclosed in a metal casing and the storage itself is a plastic compartment with a push-release mechanism to get it out. There are built-in magnets to ensure the bits stay in position and don’t fall out. Even if the whole thing is upside down.

Let’s take apart the Microsoft Lumia 540. It has seen better days for sure but it seems it was sent for repair sometime in its life and a bad job was done on it. Some screws in here are not the original screws that come with this phone and some are even missing entirely.

So it’s a combination of T4 and Phillips screws which most of you call star. Nothing the Xiaomi screwdriver cannot handle so far. The motor and gearbox are producing enough torque to make this look easy. As easy as taking this phone apart as well.

Just a couple of screws. 2 ribbon cables and an antenna cable. And it’s all done. Gone are the days when phones were this easy to repair. Now everything is put back together and it’s all working now. The battery is dead but plugging it into the Redmi power bank shows us that it turns on. It’s alive.

Interesting how we are also using the T4 screws here, the same as the ones Microsoft was using on the Lumia 540. Yes again we have a missing screw on this one but regardless it’s a walk in the park for the Xiaomi screwdriver.

This was peak engineering during its time. Brick phones were getting more and more undesirable with thin and compact being the sexy trend of the time. This was one of the most compact phones on the market but it was also very densely packed inside.

For all my ama2ks this was the phone to have. After putting everything back together it looks like the Nokia still lives. Amazing. Easy. Time for something a bit more challenging.

Taking apart the Siemens C10. A little too much to handle

As for the brick, the charger is long gone. This is the Siemens C10 and my millennials from the teapot-shaped country of sadza eaters you will remember mango. Bricks are phones people remember when we talk of mango. During this era, phones came with interchangeable housings instead of the cases we have now.

This was also one of the slimmest bricks you could get at the time. It could fit in a pocket and the antenna didn’t need to be pulled out anymore when making calls. Battery life was horrible and on top of that it took an eternity to charge. And all it did was call and SMS. Only. You didn’t even get an alarm on it.

Taking it apart was a bit harder. It’s the only phone of the 3 I had never opened before. The screws require more torque than in the previous phones and it’s here where we see 2 things. The first is this little guy is now breaking a sweat but the second one is how it’s dealing with it.

It seems to have a built-in torque sensor. So if the torque exceeds a certain level it will only operate in bursts until the screw is loose enough to be unfastened continuously. It’s really fascinating to watch and also feel that impulse torque at work.

It’s crazy how the tiny Nokia 5000d is half the size of the Siemens but orders of magnitude more powerful. And there are roughly 10 years between these 2. Tech moves at a seriously rapid pace shown by the sheer size of the components on this phone. The large chips in the Siemens are 10 to 20x smaller than what we have in modern smartphones. The size of those capacitors, they are a lot bigger than what comes in modern-day laptops. These sorts of capacitors are what you might find in a power supply. It’s wild.

Halfway through putting everything back together, I realized I forgot to put back the display interface. This sends display information from the motherboard to the display. What does not help is I had already put in 60% of the screws. Normally I could have just left this for another day but lazy as I can be I have something to help with that. So everything is taken apart again then we painstakingly try to align the display bus in its slot.

Now we can throw all the bits as they were for a 100% restoration process. The last 4 screws definitely needed more torque than what this screwdriver could handle. So I put the dial into manual mode and went in with pure muscle.

This did get the job done but all the time I was sweating bullets because when you put it on this mode it locks everything in place using the internal gearbox. The problem is I have no idea how much torque this gearbox is rated for so pure muscle from a sadza eater like me could break things inside it. Thankfully that was not the case. The operation of these 3 casualties went smoothly with zero disasters to speak of.

Battery life? I think it’s good enough seeing I was able to go through all the 3 phones with whatever battery this screwdriver came with out of the box. Charging is alright. It took it about an hour to go from a red pulsating charging light to a white solid one.

Really I like the build quality of this, the torque is good for electronics and I doubt it will be able to handle anything more heavy-duty than that, it’s designed really well and so it looks good. I just need a bit more confidence with how much torque it can handle when I use muscle with it.

This cool piece of tech goes for US$30. Now let me say if your job is opening up stuff all day every day you rapidly suffer some wrist fatigue. Something that this electric screwdriver really helps with. It’s worth the money in my book. For my fellow technicians, this is something you need to give a try. I also really want to hear your thoughts on this. You can reach out to Mi Store by clicking here.