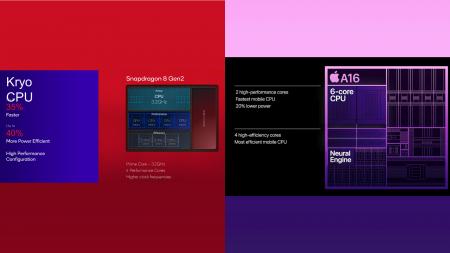 Ever since the advent of Apple’s Bionic chips, Android has not had a solid answer to the speed and processing power of the iPhone. When looking at CPU performance it was Huawei and its Kirin CPUs that came the closest to challenging Apple. On the GPU front, Snapdragon put up quite the effort with Adreno and even started bringing overclocked versions of its chipsets in an effort to close the performance gap to Apple with absolutely no luck.

In 3Dmark’s Wildlife Extreme benchmark, the Adreno 740 GPU in the Snapdragon 8 Gen 2 performed 9.2% better than the 5-core GPU in the A16 bionic but this time power efficiency was quite close between the 2 at just a 1.3% difference in favor of Snapdragon.

Then in the GFXBenchmark running the 1440p offscreen Vulkan/Metal test, the Snapdragon 8 Gen 2 extends its lead here at 23% better performance than Apple’s A16. Power efficiency during this test is also 2.6% better in favor of Snapdragon.

So the Snapdragon 8 Gen 2 has one very powerful GPU and has comfortably dethroned Apple. What I did not expect was that Mediatek would also push Apple to the 3rd spot. The Mediatek Dimensity 9200 GPU, a Mali-G715 MC11 outperformed the A16 bionic in all three tests. Yes, it did so by sheer brute force. After all, it’s the most power-hungry chipset of the 3 by a good margin. So smartphones that will come using the Mediatek Dimensity 9200 will definitely have a solid GPU but at the expense of battery life.

Gone are the days of Apple chipsets being a generation ahead of everyone else on performance. Android has caught up in a very big way and this is even before we see what the overclocked Snapdragon 8 Gen 2 rumored to come in the Galaxy S23 will deliver.

5 thoughts on “Apple no longer has the most powerful GPU. Snapdragon took it with the Adreno 740 in the 8 Gen 2 chipset”