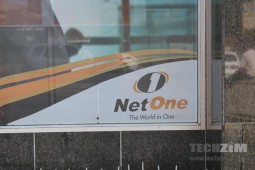 This evening, Techzim attended a NetOne event at which they launched the OneMoney ZimSwitch enabled debit card.

You might be asking yourself what OneMoney is because last you checked their mobile money platform was called OneWallet. Well, OneMoney is a ‘OneWallet come back’ (hopefully). In more formal terms, OneMoney is OneWallet rebranded.

I initially called it a come back because in all of OneWallet’s 6 years of existence, we never heard of a debit card or anything like at all, it’s only now when it’s OneMoney that we finally get to behold ‘One’; but still, that’s like 3 years after EcoCash and Telecash launched their own. So hopefully the rebrand will not just end up a flop like the last time

Nonetheless, last week we wrote about the OneMoney debit card and basically pre-emptied the functions of this new card. Maybe I could just add that since the debit card is ZimSwitch enabled, it then means it is integrated with ZIPIT. ZIPIT allows for interoperability between multiple banking platforms, 19 to be precise plus Telecash… oh and now EcoCash (to a certain extent since it’s a one-way transaction).

So maybe the question now would be, was this worth the long wait???