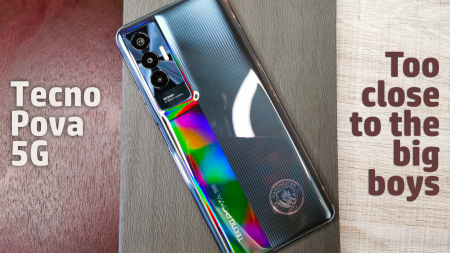 Just a few months ago I reviewed the Tecno Pova 2 and concluded that it was the undisputed battery champ. It outlasted everything Techzim has ever reviewed. Today I have the sequel. The Pova 5G. Let’s talk about it.

There isn’t a lot that’s different on the Pova 5G compared to the Pova 2. In terms of design it is still a glossy plastic back with a different style carbon fiber pattern and a Manchester City logo printed proudly towards the bottom. If you didn’t know, Tecno has been a sponsor of that football club for a couple of years now.

There is a very subtle redesign on the camera cluster and as you can tell from the label, the camera has been upgraded from a 48MP unit on the Pova 2 to a 50MP here on the Pova 5G.

The display is still a 6.9 inch plot however the refresh rate has been doubled to 120Hz. And as a bonus as well this time it supports HDR 10 for some richer more vibrant colour.

So at 1st glance it’s still pretty much the same phone. Until you get under the hood. Yeah they made a couple of design changes in there.

It’s got Android 11 running the latest HiOS 8.0 that we saw on the Camon 18 premier.

There is also a Panther game engine which curates your local gaming library and can knock off some background apps to ensure you get maximum performance when gaming. Speaking of performance, we have 8GB of some really fast LPDDR5 RAM and 128GB of  also really fast UFS 3.1 storage.

Thanks to this rapid storage, Tecno was able to implement MemoryFusion which essentially uses some of the internal storage for RAM when very demanding tasks are being run. This Pova 5G can conjure 3GB extra RAM from the internal storage if the need arises, giving it a total of 11GB of RAM.

It’s really cool and a first for Tecno but the tech itself has been around for close to a year now with ZTE and Xiaomi being some of the 1st to give it a go. That said, I am loving how progressive Tecno is being with their products.

The battery situation worried me a bit because it’s down in capacity from the 7000mAh we had in the Pova 2 to the 6000mAh in the Pova 5G. After running the endurance test my mind was blown away. Not only did it perform very well, it dethroned the Pova 2 to become the battery champ of all the smartphones Techzim has tested. I mean it beat the Pova 2 by literally 1% but as a famous street racer once said. It doesn’t matter whether you win by an inch or a mile. Winning is winning.

The Pova 5G only suffered a 29% power drain after a 3 hour torture test comprising of gaming, video streaming and video recording. All at 100% screen brightness and refresh rate set to Auto meaning depending on what’s happening on the display it was switching between 60Hz and 120Hz for the best balance between battery life and user experience. Oh and the display is an LCD panel which did not feel very bright. Sunlight legibility was on the poor side of things.

Back to performance. The reason behind this very impressive battery life lies within the processor. The Mediatek Dimensity 900. For the uninitiated, the Dimensity 900 is built on a 6nm process which makes it very power efficient but also providing bags of performance.

From the Geekbench scores you can see that the Dimensity 900 outclasses the Kirin 980 on single core performance with the Kirin 980 in the Huawei P30 Pro getting 683 ponts vs the 704 that the Pova 5G got thanks to that 6nm process. Oh, by the way. Mediatek’s Dimensity line of CPUs come with 5G built-in.

Which addresses the 5G in the name of the Pova. So Unfortunately at the time of making this review, Zimbabwe does not have 5G yet and so I could not test how that would feel on the Pova 5G. But I love the thinking that Tecno has.

The Pova is a performance smartphone. Primarily being marketed as a gaming smartphone. Because of the performance demands of gaming smartphones, the Pova ends up getting most of the good stuff. The biggest battery because gaming drinks a lot of power. The biggest display for more immersive gaming. The best touch response and smoothest display. In fact if you look closely. The Pova 5G is getting the most powerful CPU of all the Tecno smartphones right now.

The Phantom X from last year used a Mediatek Helio G95. The Camon 18 Premier used a Helio G96 and now the Pova 5G goes a whole level up with the Dimensity 900.

If you are not worried about glass and metal finishes, weight, size and cameras, This phone is actually a very good buy. Speaking of cameras.

The 50MP camera does a decent job. Pretty similar to what the Pova 2 was delivering. Good dynamic range in the photos. They are not too saturated like on the Camon 18 Premier which I personally prefer. The autofocus is quick and locks on well. I was taking some of the photos in windy conditions with no problems. It’s a very usable camera.

I have a major bone to pick with Tecno on this camera system. On the box and on the phone it says triple camera. The assumption is you need multiple cameras for different focal lengths. So one camera will be a normal or main one, often given the most megapixels. Another will be a wide angle and another will be a telephoto zoom. Maybe 2x or 3x zoom.

The Pova 5G has none of those anywhere in the camera options or settings and trust me I looked. So apart from the 50MP main sensor I don’t think there is anything being done by the other 2 sensors.

It’s not like Tecno does not know this. They did a perfect job with the Phantom X and the Camon 18 Premier. Both these Tecnos have 3 working, functional and useful cameras. It’s when they go to the Pova ,Spark and Pop series that they start these marketing stunts.

The tough talk on price

Rant aside, the Pova 5G is awesome. It’s got a huge presence thanks to its sheer size. Bags and bags of performance thanks to that Dimensity 900 CPU paired with the superfast RAM and internal storage and even though the battery is smaller than it’s predecessor’s, it’s going to outlast almost anything on the market right now.

What’s interesting is the pricing. It will be retailing between US$300 and US$320 in Zimbabwe which is very very close to the Camon 18 Premier. And the Camon 18 Premier looks a lot better, feels a lot better in the hand too because of the metal and glass finish and also the more compact and pockatable size. And even though the battery is smaller, it charges almost 2x faster. Not forgetting it has 3 real and useful cameras and the same 120Hz refresh rate but on an OLED. All for 350 bucks.

It’s a tough choice and a weird place to be for the Pova 5G. Worse still the 5G is not yet available in Zim so that’s not even a selling point in these parts. I don’t know. Let me know in the comments which one you would go for and why.

25 thoughts on “Tecno Pova 5G review. Flying too close to the sun?”