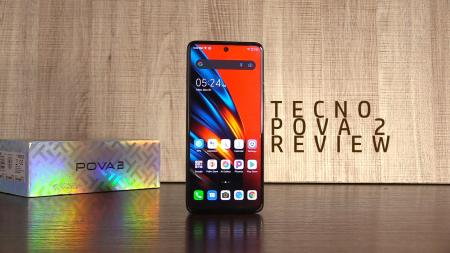 A 7000mAh battery in a smartphone. And as you may have guessed, it’s a thick one. It’s the Tecno Pova 2 and the insane battery is just the beginning.

Yeah this is a massive slab of phone. The display is a 6.9 inch 1080p estate. You know it’s funny that in 2012, a 5.5 inch display was so big it was called a phablet and 7 inches was tablet territory and yet here is a phone with a 6.9 inch display.

The body is all plastic which definitely helps with the weight. This design on the back looks amazing in this dazzle black colour plus the chromatic strip in the middle. Almost looks like it’s an RGB light if you are a gamer.

The camera system is a quad camera setup with a 48MP main camera as well as a quad LED flash. All this is in a nice rectangle with a radial optical pattern similar to the one on the Phantom X that I recently reviewed.

Beautiful as it is, it’s absolutely glossy making it a strong fingerprint magnet and also with its weight it’s going to gather scratches at a rapid pace. Thankfully the box comes with a slightly smoked transparent silicone case that keeps the goods pristine without masking the good looks.

Also I’m noticing that if there is a tempered glass screen protector on the display and you have gesture navigation enabled, the gestures are more comfortable with the phone in the pouch.

The buttons are on the right edge which include the volume buttons and the power button below these. And this is not a plain old boring power button, it has a fingerprint scanner built in. It makes so much sense to bundle the biometrics with the power button.

The sim tray is on the left edge and it’s the usual dual sim + microSD card slot so all the options are available. There is also a rubber ring to add just a bit more water resistance to the phone even though it does not have an official IP certification and I love the fact that they printed some info on which side is up when inserting the sim tray. Very good Tecno, thank you. It’s the little things that make the biggest difference.

The ports are all on the bottom edge. A 3.5mm headphone jack, a USB-C port for charging and data transfer and the primary microphone. Hold on. Where is the loudspeaker? Looks like Tecno bundled the loud speaker with the earpiece like what they did with the Spark 5 pro.

It’s the familiar look we have come to expect from Tecno smartphones. We are looking at Android 11 with a HiOS version 7.6 on top. It’s clean and really looks as pretty as other skins on the market up until the many frequent ads start populating the notification bar. The main culprits are Palm store which is Tecno’s inhouse app store, and Scooper which is Tecno’s news supplier. Thankfully you can turn these off in the settings.

Regardless, the software has a bucket of features. Like some really useful ones as well. It has the play in the background feature which allows you to keep listening to a video that is playing even with the screen off. Perfect use case is YouTube because it does not allow you to do this unless you subscribe to the premium service.

In the settings there is Special function with even more goodies hidden in it.

Social turbo has some crazy features to use in WhatsApp and only WhatsApp for now. There is a voice changer which, as the name suggests, changes your voice during a WhatsApp voice or video call to make you sound like a different person or even a different gender!

My most favourite one is a WhatsApp voice recorder. I am still shocked why WhatsApp does not offer this feature because I have had several instances where I have needed it.

Another one is peek mode which allows you to read messages without showing that the message has been opened but more importantly, it also allows you to view deleted WhatsApp messages. Yeah yeah I know the WhatsApp GBs and WhatsApp Golds have this feature but for people like me who prefer using the original WhatsApp application, this is a solution that leaves me with better peace of mind. I just don’t think these modified WhatsApps are safe.

When I checked out the POVA2 for the 1st time, my initial impression was that it’s just a battery monster. A phone just made to have an insane battery life. And whilst that is true, it is more gaming focused than it is endurance focused.

I mean this is the only Tecno I am aware of which supports a 180Hz touch sampling rate meaning the touch sensitive system on the display is refreshing 180 times a second. That’s 3 times the sampling rate on my Huawei P30 Pro and what it helps with is, well at least in theory, 3 times faster touch response and 3 times the precision when gaming or doing other tasks that require you to be nimble.

Back to the gaming stuff. There is an app called game space which pretty much curates your gaming inventory and more importantly, has some settings to improve the gaming performance by disabling some background apps and freeing internet traffic so online games don’t lag.

The lock screen also has some creative magazine wallpapers to mask that punch hole for the selfie camera. Now the fingerprint is integrated into the unlock button which is super convenient but man it was super unreliable with my right thumb for some reason. During filming I decided to enroll my left index fingerprint and just like that it worked 100% of the time. I’m not sure why that is but hey. At least with some fingers it works flawlessly.

The touch sampling rate also made it feel very responsive. Scrolls and touches were more urgent and this particular model I have has 6GB of RAM and 128GB of storage giving the processor enough room to work with.

Battery performance was phenomenal as expected. So after an hour each of video streaming, video recording and gaming the Pova 2 lost 24% of juice which is so far the best result of all the phones I have reviewed. It’s dethroned the Camon 16 Pro by just 2%. This is also taking into account that the Pova 2 has an enormous 6.9 inch full HD display. But I mean guys. 7000mAh battery. What did you expect?

The only bone I have to pick is 18W fast charge is a bit too slow for such a large battery. They should have put at least a 25W fast charge or even just borrowed the 33W system from the Phantom X.

It’s basically the same unit that we saw on the Camon 17. A 48MP main camera on the back and an 8MP selfie. It’s a capable camera. The autofocus is almost always spot on. Dynamic range is pretty good at equalizing exposure of the images and colours are pretty nice and vibrant.

Video looks great and again the autofocus system here does a pretty good job of keeping the good stuff in focus. And it can shoot up to 2K resolution as well all thanks to the beefier processor. The only features that felt lacking were better video stabilization and better dynamic range but really for this price range the videos and photos captured by this camera system are very pleasing.

The Pova 2 is an interesting phone. It’s huge in all dimensions. Some decent specs and decent performance and at around US$220 I have to say it’s a pretty good bargain.

I mean the fingerprint situation is frustrating but if you are in the market for a big phone…or honestly a small tablet at this point…with a long lasting battery and a good camera, this is the one for you. You just have to be prepared for the size and weight that it will come with. If the size and weight IS a deal breaker then the Camon 17 is an option to consider. Everything is the same except for the screen size and battery.