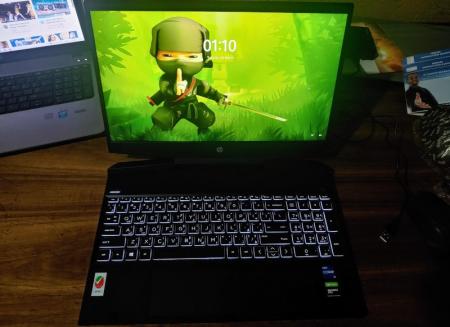 With the $9,200 laptops still in mind, we should look at the $800 one I have been using for a few months. The performance I am getting from this HP Pavilion Gaming 15 makes me wonder why anyone would ever pay more, especially $8,500 more.

I will concede that there is someone for whom the $9,200 laptop would be the only option. I will maintain though that there aren’t 7 such people in Zimbabwe.

Don’t be scared away by the ‘Gaming’ name. Whatever makes for good gaming computers also makes for a good computer. For the most part.

This competitively priced budget gaming laptop comes in 2 main flavours like all computers since AMD got good again. I have been using the Intel one but consensus has it that the AMD version is the better one.

Let’s get the main specs out of the way:

Those are decent specs but specs are only half of the story. We have all used computers that should have been good if specs were the full story.

Here’s my experience having used this computer every day for a few months.

Right from boot up, this laptop does not disappoint. Windows 11 has something called fast start-up and it takes less than 5 seconds to get to the welcome screen. A glaring omission is Windows Hello or a fingerprint scanner. Meaning you’ll have to fiddle with passwords and PINs like a caveman.

Once on, the laptop never feels slow. The 11th Gen i5 processor inside handles all I throw at it with ease. Couple that with decent 3200Mhz DDR4 RAM and not even 94 Chrome tabs can slow this beast down.

I wouldn’t say I’m a power user but the Chrome tabs sometimes get out of hand. The multiple Chrome windows are always accompanied by the Spotify app, Link to Windows, WhatsApp, GIMP (a photo editor), the Adobe Acrobat reader, Word and a few more random apps.

Even with all that going on, this Pavilion doesn’t break a sweat. It still opens new apps or tabs quickly and switching between those apps is a breeze. Everything stays where you left it, no refreshes.

So, I don’t see any scenario in which any Parliamentarian would find this laptop to be too slow for them. Office apps and Chrome, which is where I imagine most of their lives are spent, are child’s play for the Pavilion Gaming.

The keyboard and mouse

If you are going to be doing a lot of typing, you’re not going to have a problem with the Pavilion Gaming’s keyboard. There is decent travel on the keys and no mushiness, meaning you have full confidence that a key has been pressed. How fast the brain can think up words to type becomes the bottleneck.

The keyboard is backlit and you’ll love that as you do some typing in the dark when the power utility does its power cut shenanigans. There are two levels of backlight and the dimmer setting is good enough. The brighter one is a little too blinding for my eyes.

Then there is the trackpad. It is textured and offers the perfect amount of resistance. Multi finger gestures are a joy to use and I have no complaints. Except that I wish the trackpad was bigger although I can’t say its small size has affected usability.

It’s 1080p on a 15-inch display and so if you look for them, you will see pixels. However, when sat a comfortable distance from the screen everything will appear sharp.

You should note though that the screen doesn’t get too bright and so if you are going to be in the sun a lot, this might not be the laptop for you. Expect brightness in the 220-250 nit range for these Pavilion Gaming laptops.

If you intend to use this laptop for photo and video editing, the display is good enough if you’re not doing it professionally. The display covers 94.9% of sRGB and 60.5% of AdobeRGB. Meaning it’s not as colour accurate for intricate photo and video work.

HP does HP things and this laptop feels both premium and flimsy in some ways. The lid is made of matte black plastic and it looks good. However, it’s so easy to flex/twist that lid it’s scary.

The rest of the chassis feels solid even though there is a little flexing of the case around the keyboard area when pressed which may or may not annoy you.

The angular design that HP went with is striking but it can seriously injure you. The corners of the lid should come with a ‘not safe for kids’ label. You could kill use those sharp corners to cut through steel, I really believe you could.

The edges of the base, you know where your palms rest when you type, could also injure you. I’m fortunate that I don’t rest my hands on the edges so it’s not a problem for me. It could be for you though.

Personally I don’t mind the sharp edges. What annoyed me is that one of the rubber feet fell off. I don’t know what kind of weak glue they used but rubber feet should not be falling off from computers that are only a few months old.

You won’t want for ports. There are three USB 3.2 ports, one USB-C port, one HDMI port, an Ethernet port, an SD card reader and a headphone jack.

I only wish you could charge the laptop using USB-C but its only to charge other devices and to send data out.

It is called the Pavilion Gaming and so I had to see how it performs in that regard. This is where it shines. The NVIDIA GTX 1650 is no slouch.

You can play GTA V with almost all settings set to Very High and get around 50-55 in FPS. And the cooling is so good you can sustain that performance for hours on end.

I’m getting pretty much the same performance in Far Cry 5, 50-55FPS but with every graphic setting to Ultra. I cannot max out Doom Eternal or Cyberpunk 2077 but medium graphic settings and 60FPS is good enough on a computer that costs this much.

The speakers on this laptop are loud enough to drown the fans but that’s about all there is to say about them. You can play your games without headphones or external speakers and still be able to hear what’s going on.

The Pavilion Gaming lives up to its gaming name. With the beefy internals and a 52.5Wh battery expect around 4 hours of browsing before you run out of juice. If you’re frugal you can squeeze out an extra 2 hours with backlight off, airplane mode on and other drastic measures.

Contrast that with those ultrabooks that can handle a full working day and more on a single charge. They can’t handle Shadow of the Tomb Raider at High settings though like the Pavilion Gaming can.

The webcam is okay for video calls but only just, it’s not a good one but it gets the job done. The microphones will also not be winning any awards but I haven’t gotten any complaints.

You will also be glad to know that this laptop has decent upgradeability. You can add RAM and storage easily.

It is easy to summarise the above. The HP Pavilion Gaming 15 laptop is an excellent machine unless long battery life is your number one priority.

With the power cuts that are only getting worse, a laptop that can last you a full day is becoming a necessity. The Pavilion Gaming falls spectacularly short in that regard.

Also, if portability is a must have, this laptop is not for you. It’s heavy at 2.4kg and not everyone will be happy lugging that around.

If long battery life and portability are not priorities or if you can compromise on those, you won’t get many laptops better than the Pavilion Gaming for $800. Do note that the $800 is more like $1100 after taxes.

Would I recommend this laptop to our parliamentarians? I would. It’s quite the bargain for what it packs. We can buy 11 of these laptops with the $9200 they wanted to splurge on just one laptop with change to spare.

As for you, you need to think through exactly what you want to use a laptop for. You don’t have to get a fancy laptop with specs you won’t utilise. Only look out for laptops that excel in what you will be using them for.

Are the $9,200 laptops that the Zim parliament almost bought really overpriced?

18 thoughts on “HP Pavilion Gaming 15 review – not much better for the price, parliament should consider it”