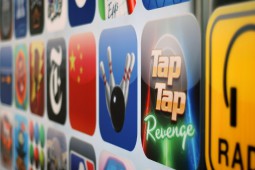 One of the main innovations that made the smartphone what it is today is the app store. With that move phones were no longer limited in functionality to what the manufacturer thought up. Developers flexed their creative muscles and came up with the craziest of apps, everything from fart noise simulators to full IDEs.

Today we find that our go to apps and games are not made by phone manufacturers. Facebook, WhatsApp, Candy Crush, ShareIt and most of the apps we rush to install on new phones are made by independent developers.

This has made the app store quite the important tool. We are left with 2 major mobile operating systems and each has its own app store with millions of apps.

The two major app stores available are Google’s Play Store and Apple’s App Store. On the iPhone side of the world the App Store is all there is. On Android there are alternatives to the Play Store.

The Play Store remains the most popular, not least because it comes pre-installed on most Android phones. Popular third party alternatives include Amazon Appstore, APKMirror, Samsung Galaxy Store and Huawei’s AppGallery.

These are but a few in a crowded market. However, it looks like we are going to be adding the Econet App Store to that list.

They are trying to keep it under wraps but the cat is out the bag, Econet are working on an app store of their own. Or so our sources would have us believe.

Most people’s reaction upon hearing that information is to ask why. Like we discussed above, we have no shortage of app stores. Do we really need a Buddie App Store?

It’s not as wild an idea as you would think. Such an app store could have its uses.

Econet distributing its own apps

Here when I say Econet I include all other Econet Global owned companies. They have a number of apps now. You might know about My Econet, EcoCash, YoMix, Sasai, MaGrossa, Vaya and Buddie Beatz but there are more, including a Mbira one.

For all the success that Econet and siblings have had, most of their apps have not really lit the country on fire.

We understand why an app like the EcoCash can have low download numbers. Users can use USSD or WhatsApp instead of the app.

If Econet have their own app store they can zero rate it and allow people to download their apps. That solves that particular problem.

One could argue that if people wanted those apps they would have their friends send the APKs. Implying that people just don’t want those apps.

We know that people can share apps via ShareIt or our own Techzim app, meaning when people really want an app, they get it, data or no. We can’t expect people to have that kind of zeal for apps they haven’t used yet though.

Google and Apple have iron grips on their app stores and that is being challenged in some countries. The major issue is the 15-30% cut they get for all in app purchases. They force developers to use their own payment solutions allowing them to collect that huge cut.

Zimbabwean devs are not too worried about all that. Not much is being collected through in-app purchases anyway.

It is difficult enough for Zim devs to get their apps listed on the Play Store. It is nigh impossible to get authorisation to have in-app purchases.

Then there is the fact that Zimbabweans are cut off from the global financial system for the most part. Ask around and find out how many of your contacts have VISA and Mastercard information in their app stores.

As a result, we have seen Zimbabwean devs resort to some workarounds. Some paid apps will have you download for free and then pay via EcoCash. It’s not pretty but it gets the job done even though it doesn’t work for subscriptions.

A Zimbabwean Econet App Store would change all that. For payments we know that it would have EcoCash as an option and I hope we get Zimswitch integration too. It would make paying for apps easier for Zimbabweans.

We don’t know how much Econet would charge as a cut but even if they match what Google are doing, it’s a better problem to have.

How to distribute the Econet app store

Here’s where I think the real struggle is. How will they convince people to download the Econet App Store?

There is that whole data issue. They can zero rate the apps on the app store but what about the app store itself. They could make the APK downloadable from one of their zero rated websites.

That doesn’t answer the question of why one would go through all that trouble to download the Econet app store in the first place. How many people out there are just waiting for a local app store so they can download and use Sasai?

Let’s also not forget that these apps will probably retain their dual listing on the Play Store. Meaning the number of people interested in this new app store is limited. There still could be room to push people to get the Econet app store though.

There could be features only available on the app downloaded on the Econet app store, especially if it involves purchases and subscriptions. I don’t know what kind of demand there is for this but it’s something.

Anyways. We could be talking about a nothing burger here. There is a chance that the Econet app store never sees the light of day. However, if it does, I wonder what the messaging will be. What will they say is the value proposition?

We shall find out before the year is up apparently. The plan is to release the app store in a few months’ time. So, we don’t have too long to wait.

What do you think about this? I’m especially keen to hear what you local devs think. Let us know in the comments below.

Apple pays off developers in a bid to buy them off