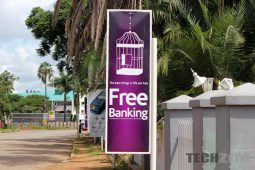 So got an email from one of Techzim’s most avid readers and he was asking us to do a comparison between what happened to a bank in the United Kingdom last week to the Steward Bank problems last year. This is quite interesting.

I don’t think there is any business that fought a PR fire in Zimbabwe more than Steward Bank did last year. The bank had a series of downtime incidents inconveniencing customers. In early January last year online banking started to be a problem. As time went on almost everything started to turn on its head. People would get false bank balances, get charged fictitious transaction fees, some transactions would fail, balances would reduce even after transactions failed and reversing those transactions would take forever.

Officials from Steward Bank made countless promises about things normalising and problems being fixed but the promises were broken as often as they way made. Social media went into a frenzy and it would have been fair to assume the purple bank would not rise from the storm.

TSB is a UK bank which boasts 5 million customers. It used to be owned by Lloyds but was sold to a Spanish financial company called Sabadell a few years ago. The bank intentionally shut down various services like internet banking and funds transfer for a whole two days on the weekend of the 21st of April.

This was to migrate their banking system to what they called an IT system for the digital age. Come Sunday when the time to switch everything back up: problems started. Confidently the bank had announced that the migration had completed and it would be smooth sailing from then on.

The worst stuff to happen to a bank happened. Customers could see and access other random customers’ accounts! The bank then made an official statement that this had happened for a mere 20 minutes but everything was in order again. Except it wasn’t…

Customers could not access their internet banking or do anything using the bank’s mobile app. The whole week ended with the bank ‘fixing’ the problem and announcing that all was well and then social media going crazy as customers complained that things were far from fixed. This went on like a closed loop: Bank apologises and announces fix -> customers discover they still can’t use services -> customers shout at bank on social media ->  bank apologises and announces fix…

Experts in the UK say this is not a simple problem

A guy called Nick Hammond, a Lead Financial Services Adviser at World Wide Technology and who used to be Global Head of Networks at Barclays had this to say:

The crisis at TSB provides a great case study for the problems presented by the sheer complexity of many banking IT systems, and especially, the difficulty involved in changing them

Reporting on this madness at the TSB, BBC concluded by saying:

For TSB and the UK’s banking sector as a whole, the waves are going to keep coming in, and they are going to prove difficult to ride.

OK! So Steward Bank’s issues were not as unique?

It seems time has exonerated Steward Bank. Not that we want to let them off the hook, no. But it seems banking IT systems are not as simple as we would imagine and especially if you want to change from one such system to another. At the time of these challenges Steward Bank was migrating to a system that would increase their capacity.

With the benefit of hindsight it looks like Steward Bank were actually brave to go through a digital migration. Surely if banks in the UK have to brace themselves for rocky storms as they change IT systems, Zimbabwean banks can’t expect any less. Steward Bank has already gone through it, perhaps the rest of our banks may have theirs soon.

I mentioned at the time when the crazy was happening at Steward Bank that the purple bank was most likely going through the pain of being the pioneer in a different paradigm. They dared to think like a digital bank and they went for it. It could have killed them but the cliche is true, what didn’t kill them only made them stronger.

Their competition is now waking up to a situation where the youngest from among them is now the lead in a country that is going digital, a world were financial services are changing from just the buying and selling of money to facilitation of transactions.

It has always been a numbers game, just that the numbers used to be the net worth of your individual account holders. Already, this is not as important in Zimbabwe where banks’ profitability in the last 2 years has been growing pushed by transaction fees whilst generally interest revenue has been declining.

Steward Bank pioneered agent banking to open as many accounts as they could. At one time they reported that they were opening 3000 accounts per day. Of course the IT system was going to react to such volumes. However, the current business model for Zimbabwean banks favours whoever has the most accounts.

Decision to place tech at the centre

Back in 2015 when Steward Bank announced their first ever profit, they made it clear that technology was going to be their competitive leverage. It looks like they have followed through with that. Followed it through stormy IT migrations and followed it through by recruiting and restructuring around IT (buzz word is digital transformation).

Techzim reader who initiated this article might as well end it:

Our reader’s interpretation of things could be a good conclusion for now:

And the TSB IT problems too. They remind me of Steward Bank and its problems with IT http://www.bbc.co.uk/news/business-43923561 . I feel these guys were unfairly blamed given how complex modern banking systems are. A comparison could be a great piece