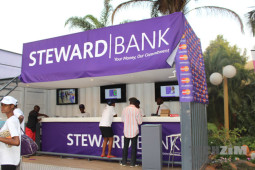 After a set of pacified half year results were published by Econet Zimbabwe earlier this week, Steward Bank, its financial institution brought some positive sentiment for the telecoms company with an after-tax profit.

For the six months ending August 2015, Steward Bank registered $1,8 million in after-tax profit which was a remarkable rebound from a $3,6 million loss in the same period last year.

This is the first profit ever registered by the bank, which was formerly known as TN Bank and rebranded to Steward Bank after Econet snapped it up in 2013.  The positive performance has been attributed to a growth in interest income and a series of cost cuts.

There was a $2,5 million increase in interest income from $2,5 million last year to $5,3 million in the period under review and costs were managed from $16,6 million to $9,1 million in the interim period. Part of this cost cutting involved a series of job cuts, a strategy which has been adopted by most local companies, including Steward Bank’s parent company, Econet Wireless.

Financial services flourishing through a focus on tech

Our costs also retreated 38% compared to the same period last year following significant cost cutting initiatives undertaken in the first half as we aim to build a low-cost structure supported by efficient digitalised channels.

That statement from Steward Bank’s chairman, Oluwatomisin Fashina, references Steward Bank’s focus on tech as a cost management tool. Some of the measures taken by the Steward Bank team to realise this included emabracing mobile money services and using agent banking as opposed to the traditional brick and mortar branch set up.

Introduced towards the end of 2014, the agent banking structure helped Steward Bank create a presence in areas that would have been difficult to set up in, while emphasising the relationship that the bank has with the ubiquitous EcoCash service.

Although other banks like ZB Bank have also made a move for agent banking, and other inistitutions should probably explore it to ensure the ability to maintain a presence in the market for a limited cost, Steward Bank has clearly benefited from its Econet parentage.

It doesn’t end on the agent banking aspect either. A seamless integration of all its banking products with EcoCash has also meant that Steward Bank is tied with the most subscribed retail financial service provider, a scenario that creates a host of possibilities for it if and when it wants to expand its product suite.

All this bears some form of testimony to the importance of partnerships with technology enablers that increase convenience and expand financial services reach.

This is hardly the end all of saving a bank in the Zimbawean economy, Steward Bank’s results, which also have an interest income growth component also show that. However, it shows that smart adoption of tech could have a way of making a tough economic ride a lot less turbulent.