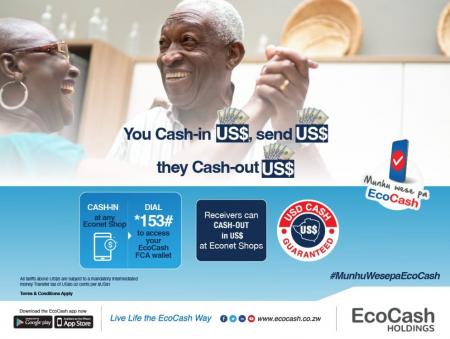 Last night EcoCash Zimbabwe launched its domestic remittance service and at the same event, the country’s largest mobile money operator also announced that Cash in services are back through its FCA Wallet that will operate from the brand new *153# USSD (and mobile app). This development looks to be in line with the near as makes no difference dollarisation Zimbabwe has been headed for, albeit at a glacial pace.

Return of the Cash-In

Late last month we reported that the EcoCash Cash-in facility was still suspended due to a directive from the Reserve Bank of Zimbabwe that said Agent Lines were no longer permitted.

Following the Government Press Release on the Suspension of Monetary Transactions on Mobile Based Money Platforms (One Money, MyCash, Ecocash and Telecash) dated 26 June 2020, the Reserve Bank of Zimbabwe (the Bank) wishes to advise the public as follows:

a) All mobile money agents are suspended from facilitating mobile financial transactions with immediate effect.

b) All merchant transactions are suspended except for receiving payment for goods and services as well as payment of utilities (water, power and airtime), which have been limited up to ZW$5000 per day for the convenience of the transacting public.

c) All mobile money liquidations should be done through the banking system.

d) All bulk payer transactions have been suspended with immediate effect.

These unprecedented measures have been necessitated by the need to protect consumers on mobile money platforms which have been abused by unscrupulous and unpatriotic individuals and entities to create instability and ineffciencies in the economy. Members of the public are assured that their bona-fide transactions will be processed normally

From that time cash-in and even cash-out were no longer permitted in Zimbabwe and the country was forced to shift to the banks for those services. In what is an interesting turn of events, Cash-In and Cash-Outs are back in USD according to EcoCash’s Domestic Remittance launch event.

The return of the cash-in facility, I think, demonstrates the power that remittances have. Before the boom we have seen over the last couple of years, it would have taken a very brave individual to predict that cash-ins (local currency or FCA) will be brought and for EcoCash no less.

That being said EcoCash’s closest competitor OneMoney launched its own remittance service (OneMoney Remit) which works on similar principles. I would speculate and say they probably got the go-ahead at the same time but maybe EcoCash wanted to work on a more complete product?

As with anything to do with EcoCash there will be an audible sigh before we look at what it will cost to do a cash-in. Well, according to the EcoCash team last night there are no fees for depositing money into your EcoCash FCA account up to US$5. After that, all you’ll have to pay is the dreaded Intermediary Money Transfer Tax (IMTT) or more commonly referred to as the 2% Tax. So, there is no charge that EcoCash is levying for this service, all you’ll need to meet the government’s requirement for the transaction.

If you want to cash in, you can do so at any Econet shop nationwide. You can deposit the money into your or someone else’s wallet. The latter will be through EcoCash’s Domestic Remittance service.

Will the informal sector jump in on this?

EcoCash is a massive company with millions of subscribers, and many of them are in Zimbabwe’s very informal economy. The one thing that killed access to digital payment options, especially in remote areas without bank branches was the banning of agents and by consequence cash-in and out.

This left many resorting to transacting purely in cash both in local currency and USD because of the lack of access to digital channels to expand options. The result of all of this was an increase in the number and power of the National Mattress Bankers Union of Zimbabwe and that hurt financial institutions because they could not get money from remote communities or reach them.

With EcoCash announcing the return of cash-in facilities at its official shops, this might cause a shift in how people store and spend their money. It’s certainly not going to happen all at once or overnight because we are all too familiar with the NOSTRO raids, flip-flopping that has happened with bond notes and the 1:1 dream we were promised way back when and the trust that has been lost.

However, this could be one of the catalysts that move things forward in a positive direction because of how ubiquitous EcoCash is as a service. At the launch event last night, all in attendance were told that merchants will soon be able to accept payment through EcoCash’s FCA facility. There was talk of priority merchants getting access first before it became more widely available.

It’s a game of wait and see now…

Last year I had a conversation with Eddie Cross, a former member of the Reserve Bank of Zimbabwe’s Monetary Policy Committee, and in that conversation, he said we should scrap company tax, halve Pay As You Earn (PAYE), and there should be a 5% Intermediary Money Transfer Tax (IMTT) to make up the shortfall.

Since EcoCash cash-in is going to involve the 2% IMMT, do you agree with Eddie Cross? You can listen to or down that episode of Technikari with the player below. Alternatively, you can access it with the link here

18 thoughts on “EcoCash FCA wallet cash-in RETURNS. Is the informal market going to jump on?”