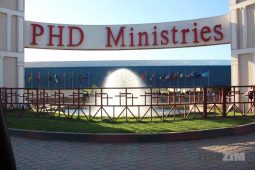 So a couple of days ago I came across the Let’s Chat app by Yadah Connect, I’m sure by now you’re familiar with Yadah Connect.

Frankly speaking (or typing), I took a look at it and didn’t see anything screaming “write about me”. I just thought of it as a standard application that most religious congregations now have. Well, maybe to say most is a stretch but you get the idea.

I downloaded the app from the Play Store on Tuesday (2 January 2018) and it had 100 – 500 downloads, which I thought were quite low considering the following that prophet Magaya has, I mean it’s obviously not just the PHD congregants that would be interested in it. Remember, PHD is not really a Church (in it’s most commonly used meaning), but a Christian gathering meaning you can belong to any other congregation but go there for P,H and D. Yup, prophecy, healing and deliverance.

However, I then checked it out again a day later i.e. on Wednesday and it had upped to the 500 -1K downloads range, I thought that was impressive. Today it’s at 1000 – 5000 downloads. Surprisingly, according to Hon Supa (minister of ICT and Cyber Security) and Prophet Magaya, the app had 122k downloads on the night of its launch (cross over night). This would have been easy to believe considering the PHD following but my problem is the disparity between that and the stats on Play Store.

Obviously Google Play Store is not the only place where apps can be downloaded but from my search so far, the only link being sent out by the ministry is the Play Store link. Also, say from the devs’ end they see those many downloads, but still it doesn’t add up considering that by now that should be reflecting to the rest of us the ordinary users on Play Store.  But then again, they could have been referring to users and not necessarily downloads, which becomes a different story altogether.

The other reason why I had chosen to ignore it was that the app kept crashing. I couldn’t scroll the app for more that 30 seconds without receiving a crash report and no, I’m not exaggerating. Today however, after the update, it functioned better (though I still experienced one or two crashes).

NB: To reduce the crashes, you might need to give the app permission to access your phone.

Anyway, why did I eventually decide to write about it today? Well, truth is I just saw it on one too many publications and then figured I might be missing something.

So, I read a few and listened to the interview on 263Chat (a press conference rather) and took home a few points. Though I still feel the need to put this out there: I really don’t understand why the app needed the minister nor a press conference to be announced… but hey, I’m open to being schooled.

According to prophet Magaya, the main aim of the app is to curb fake news, by that I mean PHD and/or Magaya related fake news. The reasoning is simple; unless something is posted on the app, then it’s fake.

The other utility besides chat, is that the app is meant to enable people to host conference video calls with of up to 20 different users.

Again, in the press conference, prophet Magaya mentioned how the app can be used to make purchases particularly ZESA tokens, it is integrated with PayChat. However, all this I cannot confirm yet because it does not appear on the app, I presume the application is still being developed. It is until then that we can write more on it, especially the PayChat bit of the app.

Lastly, the use of the app is not limited to PHD members, but for everyone. If you want to download it, click here.