Footballzone bringing local football to a browser near you 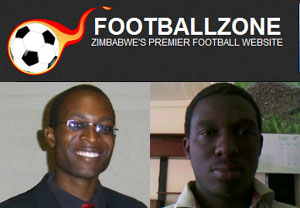 The advent of the Internet has brought about a Gutenbergian revolution to the world of publishing of which the whole blogging phenomenon bears witness. Sports like a myriad other interest areas has seen an explosion in sports blogs. If you are interested in Zimbabwe football there is a glaring vacuum in football content. If you follow a lot of the International football leagues the sheer volume and quality of blogs means that there is a proliferation of niche sites such as Zonalmarking (tactics), Swiss Ramble (football finance) or the Guardian Football section that has excellent writers such as Jonathan Wilson. This is without even mentioning the various club and league websites. Against this backdrop the dearth of Zimbabwean football content is even more pronounced.

This is the problem that Footballzone tries to solve. The brainchild of Bulawayo based bloggers Godwin Thierry Chiparaushe (right in above picture) and Gift Gana (left in picture) the site was launched on the 26th of March this year. The pair are recent graduates of the National University of Science and Technology (NUST) with Godwin studying biochemistry and physics for Gift. Chiparaushe confesses that “I have three things I am immensely passionate about football, I.T and entrepreneurship this was a way I could use all three. I am also passionate about uplifting the game in Zimbabwe and introducing professionalism to the local game.” Although he quickly adds that he’s other inspiration is his wife! Like his namesake Thierry Henry, Godwin plays as a winger/striker and at some point seriously considered becoming a professional footballer having trials with PSL giants Highlanders FC and Bantu Rovers FC but could not commit to either club because of pressing college assignments.

The site’s Zimbabwean content is created by the two founders with the assistance of freelance journalists who cover different football matches. Currently Footballzone has 4 journalists in Harare, 2 in Bulawayo and 1 in Gweru and has been running since March 26 2012. Given that on average there are 8 PSL games every weekend and some matches taking place in Hwange, Zvishavane etc the team has potential to grow its content significantly.

Since launch the website’s match day traffic as shown by Google Analytics has steadily improved from 700 unique visitors in May to 1,500 uniques in June; and monthly uniques growing from 3,000 in April to 8,600 June. These are figures we verified by accessing their analytics account. The site was developed using Joomla features real-time commentary and via Facebook; with updates being given at least every 10 minutes. This is complimented by full match reports uploaded within the hour after a match. Currently the live commentary feature has been disabled as the team is making modifications to it. There are plans to introduce a sms system to provide match updates as well as previews and reviews and news headlines. The idea is to offer this as a subscription service.

Although the website has a decent amount of local content and is a commendable effort given the resource challenges the team have their work cut out. They still have some ways to go to provide the full compliment information about local football including by Godwin’s admission covering the full schedule of matches played over the weekend. Other areas for the team to consider are providing an interactive feature in their live or minute by minute commentary that allows users to submit comments either by sms, email or social media. To some extent this functionality can be provided via the Facebook feed. The search function also needs some attention. The Fanzone also can do with more content such as wallpapers based on match day action etc.

A latent danger for Footballzone lies within the opportunity, the very lack of deep football content in the local space can tempt the team to try to cover ALL local football material and be all things to all people. Another challenge has been that advertisers are hesitant to come on board such a young and untested brand and so far the venture has been entirely funded by the founders’ own resources. The team, however is making concerted efforts in engaging the corporate world about the value of advertising on their platform.

Other than Footballzone the two founders are have jobs elsewhere with Godwin working as Business Consultant at a professional services firm and Gift working for Avelgood Apps a company he own’s and is focused on designing websites, mobile apps and e-marketing solutions for businesses. Ultimately, Footballzone serves to bridge the information gap that Zimbabwean football fans have had to endure.