If you’re in Zimbabwe you know how crazy the past several months have been financially.

Essentially, not enough cash to withdraw from the banks; A new currency called Bond Notes was introduced, which slowed down but didn’t solve the liquidity problem; Zimbabwe issued bank cards not working outside Zimbabwe anymore; not all local merchants accept cards or mobile money; some merchants are withdrawing certain services which they source outside because they can’t settle the payments in Bond Notes.

It’s crazy. Some of these problems can be solved by technology. To an extent at least. The Computer Society of Zimbabwe – an association of IT professionals in Zimbabwe has organised an event to discuss some of these solutions and if you’re in tech (or just in business really) you will benefit from attending.

I think it’s going to be interesting exchanging ideas with these people and other attendees. So I’ll be there. If you’ll be, I look forward to meeting you. Though just a mere 2 hours, it the first real Fintech event I know that’s been held in Zimbabwe ever – or I’m just ill informed! The other events just felt like bankers meeting to discuss their disruption but no real tech people to talk about what they’re doing. I digress. 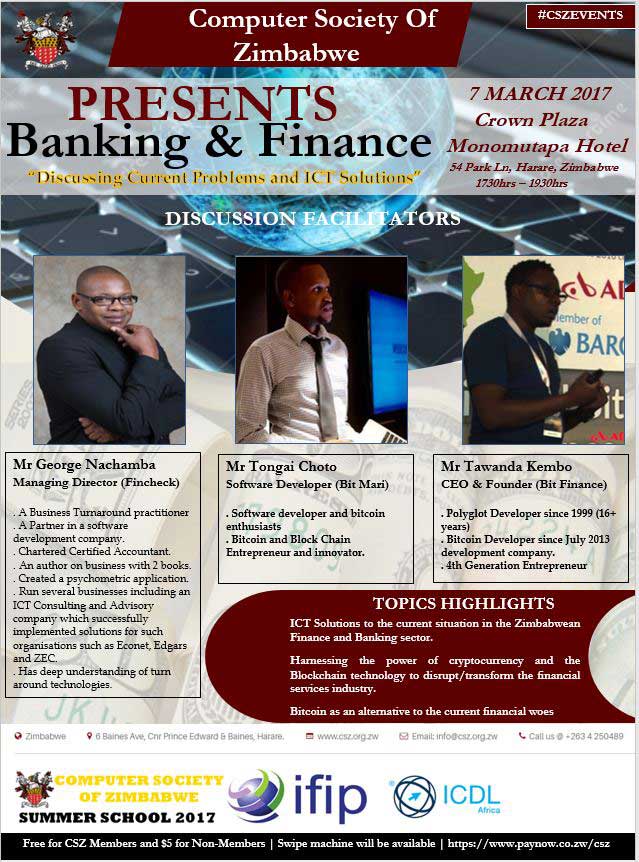 13 thoughts on “Finally, a Fintech event: Banking & Finance problems in Zimbabwe. What are the tech solutions?”