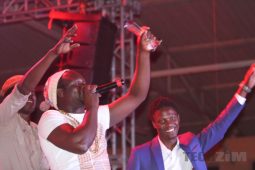 We are past debating the utility provided by the internet. We should no longer ask if we should jump on the online bandwagon but rather how to harness the seemingly endless opportunities it offers. Opportunity is a double edged sword though, because with it come threats too. We have seen giant corporations fall and whole industries eradicated simply because they ignored the opportunities the internet offered. Those who ignored its threats were worse off and those who ignored both, well, what do you call the undead? The walking dead? Zombies? Whatever you call them, they would do well to reinvent themselves in this #BroadbandEconomy.

If there is one industry which has been transformed by the internet than most (probable overstatement), that would be the music industry, as we have discussed countless times. It has been disrupted to the point of being unrecognisable from a decade ago, even and especially here in Zimbabwe. Disrupted were distribution models, marketing models and even music creation itself.

Music recording companies lamented the fact that anyone with a computer could now make music and distribute it themselves. Instead of adapting, record label executives sat on their laurels either because of a crippling lack of ideas or an underestimation of the threat posed. With a vast repository of music creation tools available online which is growing by the day it would seem the once-fat-cats are out of it with their wait and see strategy. While record label execs mourned their changing fortunes, aspiring musicians unable to pay the exorbitant studio time fees record labels demanded grabbed the opportunity by the horns. Home studios sprouted up like mushrooms, a computer installed with an illegally downloaded Fruity Loops and a $10 microphone being the requisite equipment. They realised that once the masses knew enough of their home-studio-recorded and sound-quality-challenged music they would be willing to see them live.

With live show income, better studios could then be utilised to improve the sound quality of their music. Chance the Rapper is the best example of a musician employing this strategy successfully. He is an American Grammy winning musician who has never charged a dime for his music. He gives his music out for free on the internet then income comes via live shows. He refuses to sign with record labels and mocks those who do.

In Zimbabwe we saw the explosion of Zimdancehall thanks to these home studios, with Chillspot Studios in Mbare playing a huge part in the rise of musicians like Soul Jah Love, Tocky Vibes and many others. These musicians do not rely on CD sales for their livelihood (they would starve) but upload their music to YouTube and other sites and count on people to download and spread (read distribute) it via WhatsApp. A few WhatsApp-viral songs later and a live gig is on the cards.

This way, although piracy hurts them, they embrace it and get something from it. A lot still needs to be done about piracy and is being done, hoping Zimura and Econet are still committed to their efforts for example, but in the meantime families can be fed this way. The internet brought efficiency and low cost of distribution with sites like Reverbnation where music can be downloaded for free then shared via services like WhatsApp.

With most barriers to entry broken, musicians had to be creative with marketing their music. We have seen album launches live streamed, behind the scenes clips shared (Chibaba) and more successfully, high quality music videos uploaded to YouTube. The benefits of posting videos to YouTube are twofold; as a free service to anyone with internet access you maximise the chance people will see the video and also get whatever pennies YouTube will cough out from the advertisements on your video. Music videos as a marketing tool are quite effective and coupled with availability on the internet the video could be seen  by our dear brethren in the diaspora as far as cold Canada within moments of uploading. That is how a musician can go on to stage a live show a thousand miles away from home. Locally, Jah Prayzah has caught on to this little strategy.

Musicians have had to be creative and have managed to survive but we are still a long way from an ideal solution. Piracy is still a thorn and data is still expensive. Many local musicians have made their music available on streaming services like Deezer and Soundcloud but because of the aforementioned high internet access costs not many people stream. The whole music industry needs solutions. Collaboration with players from different sectors, especially ISPs, will go a long way towards finding sustainable solutions. This is why the upcoming Broadband Economy Conference is crucial in Zimbabwe, where senior executives from different sectors will discuss the threats and opportunities offered by the internet. The internet is a tool, let us make it one. #BroadbandEconomy