Apparently, the Zimbabwe Stock Exchange (ZSE) site has been hacked.

We received a tip alerting us to this some minutes ago (two actually, one came as I was already writing this). Nonetheless, we’re not sure how long it’s been like that maybe because our own internal ‘Equities Analyst’ who faithfully checks on it every now and then is away.

If this indeed is a hack, this will not be the first time the Zimbabwe Stock Exchange site is hacked. Back in 2011 the site also faced some downtime, though then it was indeed a confirmed hack. It then took ZSE 2 years to ‘recover’ from that hack and in 2013, they (re)launched a website. This time, the website was developed a local company called Big Law (the previous one was Adept Solutions).

As if that was not enough, in 2016, the ZSE site was taken down. By that I mean the one people had commended was taken down and replaced by a rather pathetic one. There were no explanations as to why they had chosen to go down that road. This action in turn also affected other businesses that relied on the site for information etc. e.g. ZimStocks.

And now? Now this. 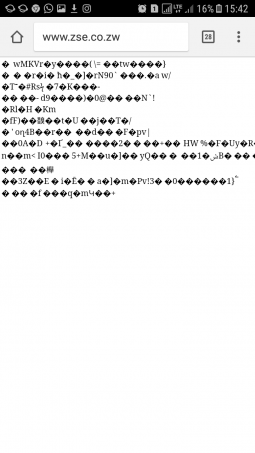 Also interestingly, the websites for Kefalos and Lobels are also displaying the same funny symbols that the ZSE site is displaying. And from our check, all these three websites are being hosted by YoAfrica. So there are two things involved; i) it might not be a direct attack on the ZSE site itself, but more of an attack on the host, ii) the other three are just a cover up or lastly iii) someone is on a hacking spree.

All these possibilities have their own different implications, but the bottom line is it all doesn’t look good… at all. Seeing how the Zim Stock Exchange had become interesting to follow following the step down of the former president of Zimbabwe (still feels strange to write that).

In fact, the ZSE site has been doing much in serving as an indicator as to how much trust and confidence the people (local and foreign) are developing in this ‘new’ Zimbabwe. We sincerely hope that it’s just a technical glitch and not a hack otherwise that a serious 10 steps back.

We’d be sure to write more on the implications of whatever this is after we can sincerely confirm if it’s a hack or not.

Confirmed, it was a hack.

According to a reliable source, the 3 websites that we mentioned above are not the only ones that have faced an outage. It seems like some of the sites that are hosted by YoAfrica have been affected by this hack. So the hack may actually have been targeted towards YoAfrica servers which host these sites and not the individual websites.

If you know other websites that are currently offline, please let us know in the comments down below. We will continue to update as more information comes.