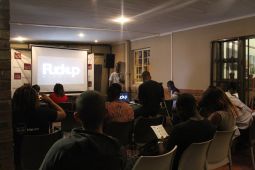 We’ve talked about F*ckup Nights (FUN) Harare before and the event is back yet again, this Friday.

Fuckup Nights (FUN) Harare is part of a global movement and event series that shares stories of professional failure. Each month, in events across the globe, we get three to four people to get up in front of a room full of strangers to share their own professional Fuckup. The stories of the business that crashes and burns, the partnership deal that goes sour, the product that has to be recalled, we tell them all. We do not aim to praise failure or encourage it, but rather to remove the stigma associated with it and learn from it.

The first four volumes of Fuckup Nights Harare saw a multitude of successful entrepreneurs, innovators, and industry leaders sharing their stories with us. Simbarashe Mhuriro, Joseph Bunga, Donna Ray White, Candice Mwakalyelye, Farai “The Voice” Gwaze, Ruvheneko Parirenyatwa and the women behind Unplugged, Chiedza and Ellinah.
And we aren’t slowing down! We have four amazing speakers lined up for this edition: Reverb7, Theophilus Marufu, Kuda Musasiwa, Ngoni “Zash” Chinhara, and Pedzi Chimbwanda.

The following speaker profiles were provided by Impact Hub:

It’s a pretty interesting lineup and tickets to the event are RTGS$25 each for advanced tickets and will be RTGS$30 at the gate. You can purchase tickets from www.impacthubharare.net/buy-tickets or send via EcoCash to 0782 639 919