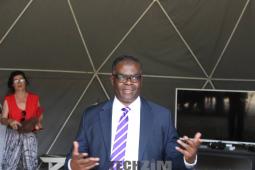 Fortune Chasi has been dismissed from his role as Minister of Energy & Power Development. Chasi’s replacement for the post is Soda Zhemu

The press statement announcing the appointment of Zhemu reads;

The appointment of Soda Zhemu, and the removal of Hon. Fortune Chasi respectively, are with immediate effect.

Dr Misheck Sibanda – Chief Secretary to the President and Cabinet

What do we know about the new Minister?

Soda Zhemu is 46 years old and according to the Parliament website we know the following about the new Energy Minister: