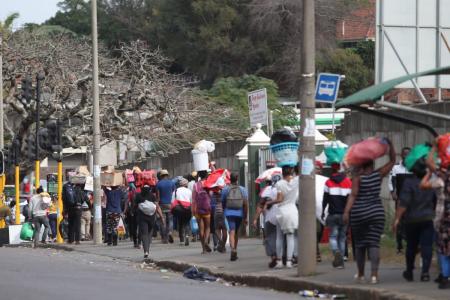 Last month there was widespread looting and chaos in South Africa as alleged supporters of former president Jacob Zuma protested against his incarceration over contempt of court charges. The protests disintegrated into chaos as people started looting shops and blowing up ATMs. Among the popular items stolen were smart TVs.

Samsung South Africa has now announced that they would be remotely blocking all TVs looted from shops during this period. They will do this using a security feature known as Television Block Function which is found in all modern Samsung Television sets. The block will be activated on all Television sets looted from their warehouses in Durban last month.

TV block is Samsung’s remote security feature which detects Samsung TVs that have been activated illegally and not by their rightful owners. The feature allows Samsung to remotely disable all functions on the affected Television set rendering it useless. Essentially it turns your stolen smart TV into nothing more than a heap of plastic with a screen.

A major weakness of the feature is that it only comes into effect when the culprit device connects to the internet. As soon as the TV connects to the internet its firmware contacts Samsung’s servers to check if there is a block on the TV. The TV sends its serial number to the servers and if there is a block in effect the TV automatically disables itself.

In the event that your TV is blocked by mistake, you have to inform Samsung. You can do this by sending a valid proof of purchase to their support email address. This can be a major issue if you are in Zimbabwe and no longer have a receipt for a TV you purchased in South Africa.

Most people get their TV sets from the Gulf Complex or other small Facebook vendors. It’s unlikely Samsung will accept receipts issued by these vendors as valid proof of payment. This means that just like you need to stay away from dye stained Rands you also need to be careful when buying a new TV.