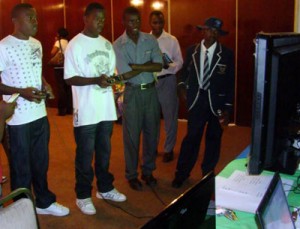 We just got an email from the organizers of the Zim cyber gaming LAN events. There’s going to be a tournament this Sunday, 7th of November. The organizers, Yo Africa, try to hold a tournament almost every month. Last one was on 3 October.

If you’re a gamer and attended ICT Africa 2009, you have a clear idea how thrilling the tournament can be and will definitely not want to miss this. If you haven’t been to one, then hey, here’s your chance to meet other Zim gamers and claim you title as Zim’s best!

Techzim has an avid gamer who’s going to attend this one, so expect a story on it next week!

Here are the full details of the tournament:

The suggested tournament games are;

If you want to come but don’t want to play in the tournament, you can enjoy the atmosphere and play other games.
There are 32 machines available to rent which have great gaming hardware including;

One thought on “Cyber Gaming LAN Tourney This Sunday”