According to Zimbo Jam, the December figures represent an impressive growth of over 1,500% for the site’s readership over the year.

Zimbo Jam founder and editor, Fungai Tichawangana commented; “Big numbers of visitors mean more resources are needed to run the site, but more excitingly, mean that we can now start to make the site pay for itself through adverts. We can sell the site more convincingly to advertisers if we have more visitors.”

Zimbo Jam’s Facebook page also has some impressive stats to show. The page was launched in January last year and now has just over 3 000 fans and already gets up to 30 000 profile views on Facebook on busy days.

Tichawangana expressed gratitude to Zimbabwean artists who he says are the main reason behind the website’s existence. He also thanked the team that runs the site and readers for supporting Zimbo Jam.

“The support we have is pretty hectic,” he explained, “if we don’t update the site we get messages from people telling us to hurry up. We also get numerous messages of support on Facebook, by SMS and by email from Zimbabweans all over the world. For instance we got a message the other day from a Zimbabwean who works in Dubai saying that she wakes up to Zimbo Jam every morning.  Just over the holiday we had a Zimbabwean who lives in the USA come to our offices and say she hasthree sites she visits every day and among them is Zimbo Jam.”

Tichawangana conceded the site also gets lots of criticism from people who want the site to be better or sometimes, people who just don’t like Zimbo Jam. “We got one email that said ‘your site is unbalanced and lacks depth’”, he said. Tichwangana explained that this reminds the Zimbo Jam team that they can’t please everybody but that it helps them assess their work.

A recipient of NAMA Outstanding Arts Website Publisher award in 2010, Zimbo Jam’s stated aim is to “showcase Zimbabwean arts, culture and lifestyle, to talk about Zimbabwean entertainment, entertainers, showbiz and lifestyle as if there was no tomorrow and to find talent and showcase it.”

Zimbo Jam was started in November 2008 but has its roots in the extremely popular but now defunct itsbho.com. The itsbho lifestyle magazine was founded in 2004 and was also edited by Tichawangana. 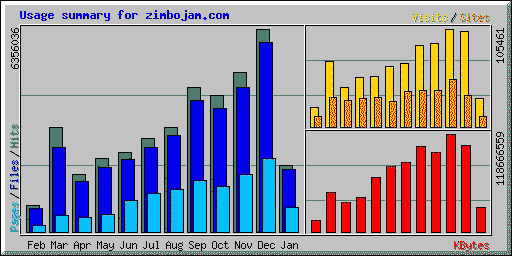 update: Please note that the visitor stats referred to above are from server based log analysis and not a web analytics tools like Google Analytics.