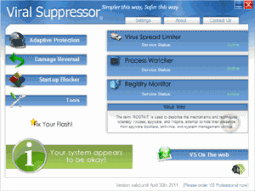 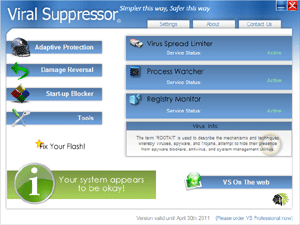 A local start-up, TechTribe, has released the first beta version of a virus protection program it’s calling Viral Suppressor. The software is available for free download on www.vs.co.zw, and TechTribe is encouraging visitors to download and try the software.

TechTribe was founded by Tawanda Katsaruware and Simon Mambariza. Katsaruware, a former Chinhoyi University of Technology student who is the technical lead and developer of the software, says he developed the program as part of his final year project for his first degree in 2009. The duo is working on a professional version of the software, which they say will be ready for release later this year.

We met Katsaruware and Mambariza at their offices in Harare where they demoed the software and shared with us the inspiration behind it. According to them, the software can provide basic protection to Microsoft Windows based computers, all without any need to download virus definition updates the way regular anti-viruses do:

All antivirus products require updates, which, without these, your antivirus is virtually useless. The updates have to be acquired over the internet. Here in Zimbabwe, the majority of computer users do not have internet connections. Others have it but it is either too slow or too expensive to download the updates that range in size from 40 to 100MB. ($8 to $20 per update on Econet rates).

So I decided to find a way to protect users of developing countries like Zimbabwe. I had to find a solution that requires no internet whatsoever so everyone could be protected from viruses whether they have an antivirus or not.

We had a long discussion about this and it kind of didn’t come out clearly how much different VS is from a regular anti-virus or where it lacks versus where it’s better. We don’t blame them though; the program is in its first beta. We’d be shocked if it can outdo mature anti-virus programs like those by McAfee, Symantec, Trend Micro and the like. We’d happy if you readers try the software and add your comments `below.

Katsaruware also explained that Viral Suppressor can reverse changes made to a computer after a virus has been removed noting that most regular anti-viruses only remove the infection and stop there.

On how the project will be resourced, Katsaruware said TechTribe is in discussions with Chinhoyi University of Technology for possible technical partnership on further development of the software.