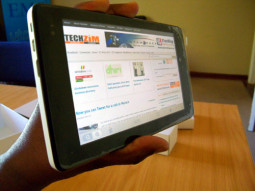 Last week we posted a review of the Huawei Ideos U8150, a small smartphone that offers great value for money, and one every person looking for a new entry level smartphone should get. Along with the U8150, we also got a Huawei tablet from Econet called the Ideos S7 Slim to review. This article focuses on the S7. 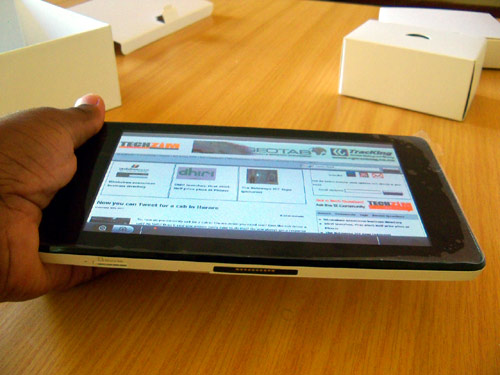 There’s only one way to start off this review, and that’s to tell you that if you’ve been wanting to get yourself your first tablet, you might want to sample this one first before you run off to get that $1,000 iPad or $700 Galaxy Tab. And here is why.

We’ve reviewed in the past about two entry level tablets, and the thing with low cost tablets that are also low quality is that you can feel the cheap quality design the moment you handle it. The responsiveness of the screen also suffers a lot of design compromise. Speed is the other issue. The S7 excels on these factors and you have to really look deep to find why Econet (of all companies) is selling it at half the price ($450) of the high end tablets on the market. And if you’ve never used the high-end stuff, you just won’t find it.

On specs, the Ideos is 200 x 109.5 x 12.5 mm in physical dimensions which means smaller than the iPad but about the size of the 7.1 inch Galaxy Tab. The screen is TFT capacitive and didn’t disappoint at all in terms of responsiveness. We downloaded Angry Birds from the Android Market and playing the game was a pleasurable experience in terms of smooth transition and sharp pictures. Sound as well. No different from the experience we’ve had playing it on the Galaxy tab save for a slightly lower pixel density but again, hardly noticeable if you’re not coming from the high-end stuff. 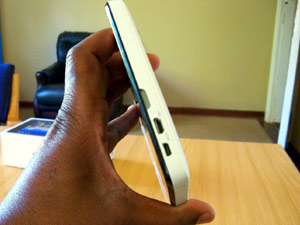 In terms of its access tools, the notable thing is that this not just some media consumption tablet. It actually is a big mobile phone as well. You can have your GSM sim card in there and do voice calls and messaging like you can on any mobile phone. You also have 3G, Edge and GPRS for your data. Wi-Fi as well. Ports wise, you have a microSD card slot, a microUSB port for data transfers, an ordinary headphone jack and a power port. GPS has become standard on these devices but we will mention it anyway. The tablet has two cameras, one on the back and the other on the front.

Onto why it retails for less (in addition to the screen) the S7 has a 768 MHz processor inside and only 256 MB of RAM. High-end tablets start at almost double the processing power and more than double the RAM. Only the techies among you will of course care what 768 MHz means, and that’s good, because for the rest of you that don’t care, we didn’t feel this lower processor spec making much of a difference performance wise.

The overall design of this 7-inch tablet also doesn’t look cheap at all. It’s quite solid. We didn’t particularly like the design finish on the back though but only because we noticed it’s easy to get it dirty.

Onto the using experience, the Android system (Froyo) feels so part of the design of this Huawei tablet, and this is the what we keep getting from Huawei devices. We think part of it is because the company is part of the Open Handset Alliance (OHA), the consortium of companies behind the Android project.

Getting around the soft features of the tablet once you have switched it on was great too. Creating a Google account, making a call, accessing the SMS messages, connecting to a Wi-Fi network, disabling the SIM’s 3G data access so you can use Wi-Fi, accessing the Android Market, downloading apps, doing emails and other tasks are all straight forward. 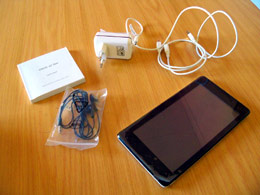 Battery life is about standard. You just shouldn’t complain if is this is going to be your Angry Birds machine as it will definitely run out fast, and a downside to that is you cannot charged it via micro USB, which means getting off it a bit to connect it to your wall power source. The charging cable it comes with is also not particularly long so good luck using it while it’s charging.

Another slight problem is that the internal memory is only 5GB, so expanding its memory is going to be one of your first tasks after buying, which edges the price higher. Now, any price higher than $450 quickly approaches the 7.1 inch Galaxy Tab which starts to weaken the ‘value for money’ argument.

The tablet by the way, landed in Kenya at the same price it’s retailing in Zim. At its home in Asia, the S7 retails for around US $300.

When we published the first article about the announcement of this tablet last month by Econet, we noted that this device was going to cause an upset in the local market because of its price. At US $450, this Android tablet beats (on price) the high-end competition from the Galaxy tab (around $700), iPad 2 ($1,000), Acer Iconia ($700) and Asus Transformer ($1,000) and while it doesn’t match them on bells and whistles, it manages to deliver a satisfying experience. At $450 it also means there’s no reason anymore for anyone to buy those cheap quality Android devices coming in from China (some unbranded and some with all kinds of names), unless maybe they slash the price down to below $100. I personally still wouldn’t buy then.

If you’ve been wondering what low priced tablet you can buy someone for Christmas without having them hate you forever, this Ideos S7 might be your answer. We loved it.

Here are a couple more pictures of the S7: 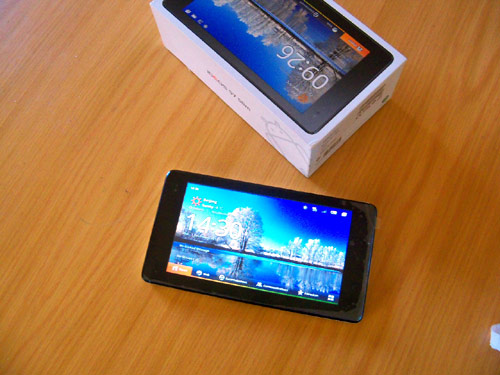 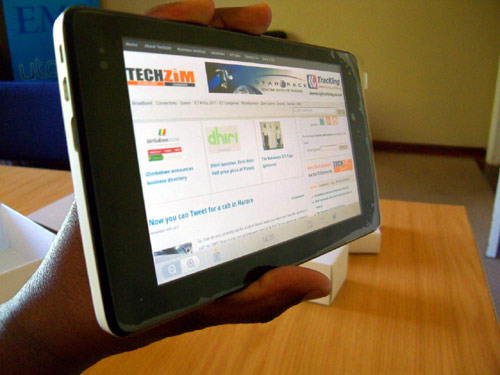 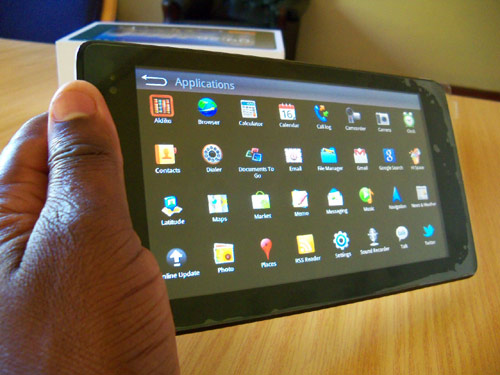 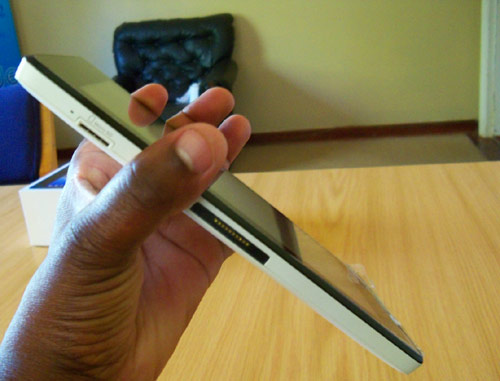 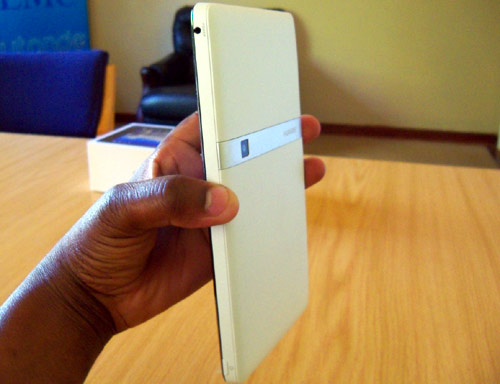 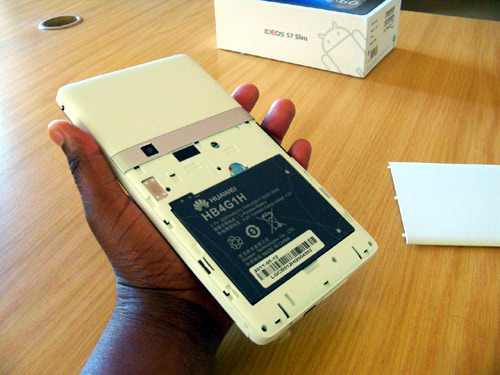 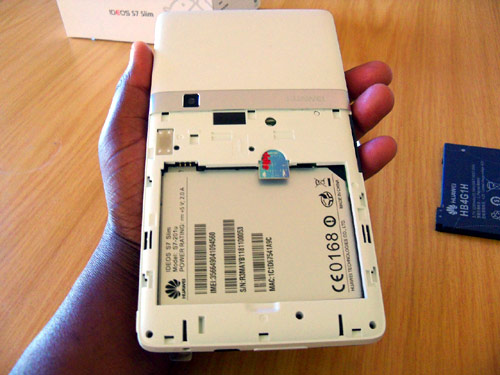 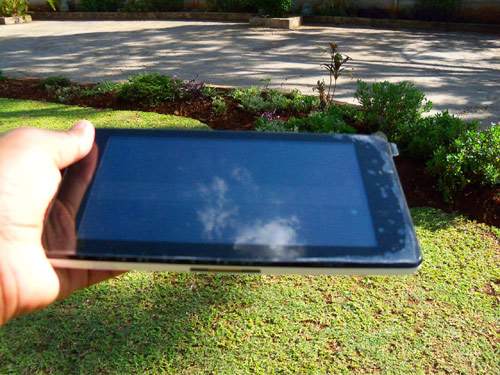