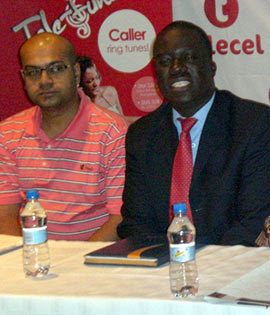 The tech company behind Telecel’s recently launched Teletunes value added service, Pop Technologies, says it is confident that the service will significantly change the fortunes of Zimbabwean artists, effectively transforming Zimbabwe’s music industry. Pop services expressed the assurance in communication sent to us in response to some questions we sent them.

“As you realise, local distribution channels are no longer as strong, fortunately almost everyone has a mobile phone” explained the Pop technologies spokesperson. “I must say that Zimbabweans now truly appreciate their own musicians, I mean even if you listen to our local charts you realise that our own stars are as popular as international artists but perhaps the challenge has been how to access the music.

“Traditionally artists have received revenue from record sales, live performances and media airplay. Mobile driven music will open a fourth channel. The first channel (record sales) is under pressure from piracy, the second channel is very seasonal then the third channel has become overcrowded, there is so much good music out there but I do not think that radio and TV can cope with the supply” explained the company’s spokesperson.

Indeed the traditional distribution methods don’t work as well as they did some 15 years ago, when cassette and CD sales would rack in meaningful returns for the record companies and in some cases, the artists as well. However, just how transformational Teletunes will be, or how it will be received by subscribers, will only be clear over time. Pop Technologies itself wouldn’t disclose any figures only saying the “impact so far has been fantastic and we think it can only get better.” It’s not uncommon for companies to not release such stats until they look really good and impressive to the market. But it’s just been a month.

The VAS company says it has secured contracts with some of Zimbabwe leading musicians across different genres (including Mbira, Jazz, Urban Grooves, Ragga, Sungura and Afro Rock Fusion) and are in extensive talks with some of the biggest recording labels locally.

Caller Ring Back Tone (CRBT) services have been a common value added service in networks around the world. The service basically enables a subscriber to select and rent a song for a month and then have the song played back to people call them. If you’re techie, think of it as an interactive voice response (ICR) system, but a bit more advanced to allow hundreds of thousands of songs to be available to the subscriber to choose from and a system to bill them for the songs.

The Teletunes launch in early May 2012 was attended by one of Zimbabwe’s top musicians, Oliver Mtukudzi.