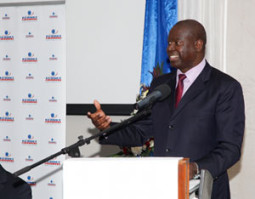 Today, Econet Wireless Zimbabwe, the company that has the lion’s share of the mobile telephony & broadband business in Zimbabwe, announced at a press briefing their annual financial results the period ending February 2013.

The results are not the usual super impressive goodness the company has been posting in recent years. Profits after tax are down 15.6% from $165,741,088 in 2012 to now $139,938,220. Though the total revenues increased, the rate of increase this year, 13.7%, is much lower than the change the company registered from 2011 to 2012, 24%. The cause we noted from the CEOs presentation is that voice revenue is slowing down but costs remain very high. Costs like operating costs (generators, diesel to run them, logistics etc..) and the cost of money borrowed.

Data is however picking up with now, 3.2 million mobile broadband subscriptions. But data doesn’t have the network restriction advantages that allowed voice revenue to flourish in a market where only 3 operators were licensed. Plus, the internet itself actually opens up gates for over the top services like Skype, Viber, WhatsApp and others that are eating ever faster into the traditional revenue streams.

A copy of the abridged results has been made available on the Econet investor site, and you can also download it here.

Here below are the major points we picked from the results: