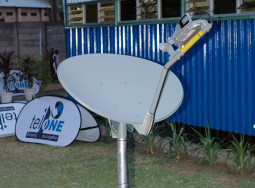 A little over a month ago when we wrote about TelOne’s new Ka-Band VSAT internet service, the company said it hadn’t yet finalised the pricing. Today, at a breakfast meeting held in Harare, TelOne released the pricing of the service.

Equipment and installation price is $670 which is very low when compared to other VSAT options, even those powered by the same satellite provider. The monthly subscription packages are as follows:

The subscriptions compared to other services on the market (including TelOne’s own ADSL service) is competitive but not the lowest. But there’s one key thing to keep in mind. If you’re going for VSAT, then you’re probably in an area that doesn’t afford you any of the many alternatives city internet users have. So a comparison with ADSL, Fibre and WiMAX rates really is meaningless. For VSAT this is a good deal.

TelOne also explained today that those data caps don’t mean you will be disconnected completely from the internet; you will just be downgraded to slower internet if you hit the cap.

The audience at the announcement today comprised a number of executive from schools outside Harare. An issue they raised which they said should be solved first for solutions such as TelOne’s VSAT service and the country president’s school computerisation program is the issue of the lack of electricity. Many schools in the rural areas they said, don’t have any electricity so the computers and the internet are really the cart coming before the horse. TelOne acknowledged this being an issue that’s affecting uptake of the service.