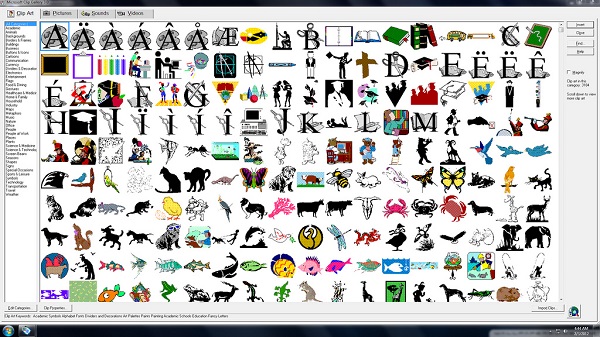 We all agree that the folks at Microsoft are incompetent good for nothing coders right, cue you should all agree with me. But once in a while they get it right and come up with awesome ideas, or just steal them from FOSS, in a way that more than atones for their misdeeds and makes them the success that they are.

One of their most brilliant ideas was Clip Art which the good folks at Microsoft decided to quietly bury just over a week ago without inviting us to the funeral.

My first experience, and probably yours, began way before touching a computer when I was in kindergarten during the arts projects.

I have never been good at drawing pictures of anything but the simplest stickman so to help out with this inability my teacher Miss Karumbidza would bring us her old fashion and Parade magazines from which, me and others similarly handicapped, would cut out pictures using razors and scissors and paste them using glue on our writings to make it more attractive and art worthy.

The simple yet useful idea predictably gained popularity on computers where in the first days people found it hard to use the mouse to draw and most people could not afford scanners or use/afford other sophisticated drawing computing accessories.

Although Microsoft Office was not the first to include this functionality, it was their Office suite that gave it popularity. Clip Art became a built in feature of Microsoft Word 6.0 in 1996 and came in with a helpful 86 images that users could include in their fliers and other publications.

By the time of its passing, Clip Art had well over 140 000 built in images that a user could include in their office documents without the need to possess an artistic talent or an active internet connection.

Zimbabwe is mostly a flier nation. The course of events has been such that, aside from online advertising, fliers and billboards are about the only affordable and effective means of advertising ever since the national broadcaster decided to chase away viewers with their outdated and monotonous content.

Every business man and individual has either used or received a flier, or seen a billboard or poster with Clip Art on it at one point or another. Despite its usefulness Microsoft feels it is time to retire the service from its products.

Like everything else the internet’s popularity is behind the death of the utility. More and more people in the developed and an increasing proportion were using the internet to source their images instead of the service. Although their Clip Art website at Office.com was online they naturally did not have as many images as the internet at large.

Using the internet allows people to get more content appropriate images and choose the best resolution and size among other things thus making it a more favorable option.

A lot of individuals in Harare who call themselves graphic designers simply use Google Images or Bing to search for images online that they then tack onto their text either in Microsoft Office or Corel Draw and then pass it on as their wonderful creations. Have you ever noticed that a lot of music videos promotion posters have foreign looking pictures as part of their design? Well we have the internet to thank for that.

Do not despair though, you can still use Bing Image Search (you can Google that to get to the website 😉 ). The search engine comes with a Creative Commons filter that will allow you to search for images that fall under the Creative Commons license and thus tagged.

This gives you the right to use other people’s works legally (sometimes limited to free usage for non-commercial use). Not that copyright infringement has ever stopped most Zimbabweans from getting their way with other people’s creations.

You can always switch off the filter, to get more image results but who are we kidding most of you use Google Image Search anyway. I am curious how many people use Bing Image Search in this country?

RIP Clip Art, yours was a life well lived and may your spirit continue to dwell on the typists and Graphic Designers’ computers in towns and growth points.

One thought on “Farewell clip art, it was a life well lived”