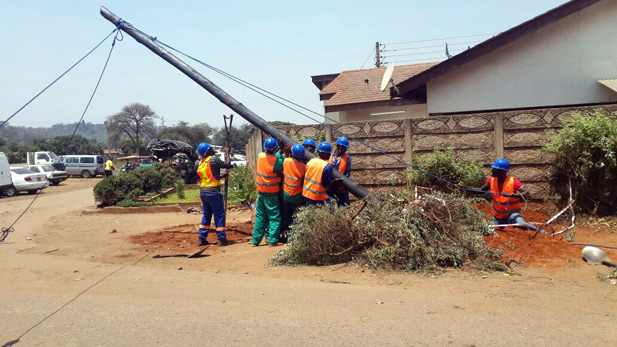 A few weeks ago, we noticed that Liquid Telecom contractors are now doing two significant things to smile about. First, they are now laying fibre in Zimbabwe high density suburbs. The first one, from what we’ve seen, is Warren Park, a suburb about 8km from the Harare city center. It’s highly populated so there’s more possible connections per km of the fibre. Not too sure though how many are willing to doll out ZOL’s minimum $89 a month for fibre.

They are doing medium density suburbs like Braeside, Chadcombe and Msasa Park so if you’re in any of these areas and Zimbabwe’s not biting you as much as the rest of us economically, here’s something for Christmas.

The second significant thing is that Liquid Telecom are now doing overhead fibre. Significant because overhead is faster to roll-out  (takes about 25% of the time it takes to lay fibre underground we’re told), and much cheaper too. We’re not sure by how much but indications are it’s at least half of the cost of underground installations. Overhead, from the information we have involves just digging a hole for the pole, planting the pole, and then linking the fibre pole to pole. Much simpler work than dealing with people’s driveways, earth, stone and crossing tarred roads.

This means so many more homes will have the possibility to connect. And if you’re starting that web startup from your bedroom or parents living-room, then there’s a better chance of getting very fast broadband without paying crazy city rentals.

Liquid has said in the recent months that they now have fibre laid along at least 20,000 homes in Harare. High density and overhead will surely increase that significantly.

Overhead fibre is ofcourse nothing new; PowerTel have been doing this for a while now, thanks to their parent company’s electricity pylons. Since most of these areas already have ZESA or TelOne poles already (power and telephone respectively) wouldn’t it make more sense for Liquid to use existing poles for their fibre? And maybe rehabilitate the poles that are damaged on a commercial basis. Would certainly be cheaper, and maybe faster (in terms of environmental regulation) and look neater too.

Here are some more photos we have of guys doing the overhead fibre: