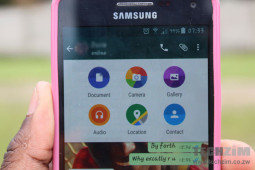 If you enjoy getting more from WhatsApp than just the chats, videos, audio clips and pictures then you will probably celebrate the latest improvement to the instant messaging platform. Users of WhatsApp for Android and iOS can now send documents.

Users of WhatsApp for Android and iOS can now send documents. This currently applies to the latest version of the app available for both and Android. It’s a feature that most people have been anticipating and like other improvements to WhatsApp, it had been speculated on for months.

It also ties in with WhatsApp’s recent announcement that it will stop supporting its app on some mobile operating systems – a move that is meant to ensure that it can continue to roll out a host of new features.

How it works plus its Ts and Cs

Like the other options for attachment, a user taps on the paperclip attachments icon where as usual a six-option grid appears. The WhatsApp Documents option is the first on that lineup.

Attaching a document is as easy as attaching any other medium really. Just tap on the option, and select the document on your phone that you want to send to a contact or share with a group.

However, there are some rules to this document sharing. Firstly, it’s only for PDF files, something that shouldn’t really be an issue for now since this is only the early version of this feature.

Then there’s the compatibility issue. Both the sender and receiver need to have compliant versions of WhatsApp, something that also affects the option of sharing documents with a group.

It’s hardly a train smash, as we mentioned already, this feature is on versions that are easily available from the respective app stores.

Understandably there is a segment of WhatsApp users with a plethora of alternatives for communication (ie they have access to the internet on different devices and in different environments) who view WhatsApp as just another tool for chat and multimedia exchange.

However, the service has become a strong representation of internet access in a country like Zimbabwe. With the high cost of broadband and limited disposable incomes, any alternative that makes internet access affordable is placed on a pedestal of sorts.

It’s these same conditions that can be used to explain the WhatsApp bundles that were introduced by Zimbabwean mobile operators. needless to say, it’s these bundles, and every other reason behind the WhatsApp phenomenon that makes features like WhatsApp Documents a big deal.

People can now share content in another format through WhatsApp, enhancing the IM platform’s value proposition and creating another reason to use a Facebook service as an internet alternative.

In some crude way, this also brings WhatsApp closer to the email service value proposition – in fact, it could even outpace it, especially in Zimbabwe where being on WhatsApp is slowly becoming a way to access the internet.

The world is all about instant access to data and information, something that services like email aren’t necessarily geared for when stacked up against IM platforms that are all about real-time exchange. While email still has its own strengths, features like WhatsApp Documents are constantly stripping away those points of difference.

Update – In an earlier version of this article, we had incorrectly stated that the file limit for WhatsApp Documents is set at 15 MB. The actual file size limit is 100 MB.