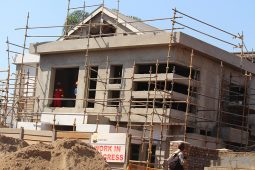 Construction may not be the first industry that comes to mind when you think of areas ripe for disruption by blockchain technology. The construction industry is not where digital innovation has traditionally made many inroads, and it can be hard to imagine how distributed ledgers might help people whose jobs are to pour foundations or sheath roofs.

Yet a Zimbabwean startup in partnership with Microsoft is going to the change the landscape of construction in Zimbabwe and Africa by incorporation the blockchain technology in construction. Africa Infrastructure Development Group (AIDG) is that Zim startup which you keep your eyes on if you are in construction.

The startup has already partnered Microsoft to chase its vision and goal. Microsoft one on of the US tech giants leading the blockchain revolution, having already invested considerably in the technology in recent years.

For a startup partnering with a giant like Microsoft, it’s an achievement in itself. It means that AIDG has a business case good enough to convince Microsoft to tag along. In this partnership, Microsoft brings along not only its technical know- how but most importantly its technological resources (be it software or hardware). Microsoft is no stranger to lending its helping hand to startups in Africa. Its 4Afrika initiative is a testament of its commitment to helping African startups.

But AIDG’s use of blockchain technology in Zimbabwe’s construction industry hinges on the regulatory authorities’ acceptance of this technology. AIDG needs the blessing and support of the government and above all the Reserve Bank of Zimbabwe. It’s not surprising that officials from these institutions graced the Disruption in the Construction Industry conference Using Blockchain Technology conference held yesterday.

Where is IDG is coming from?

Zimbabwe (and Africa at large) is still a young country which a big room to expand infrastructure-wise, thus public infrastructure. Inadequacies of infrastructure coupled by inadequacies in housing (Zimbabwe particularly)altogether is a recipe that points out that construction will boom in Zimbabwe (at Africa) sooner or later

Why AIDG thinks blockchain is necessary for the construction industry

As an industry with so much money at stake and so many complicated moving parts, the construction industry endemically suffers from disputes and litigation. Many times, things like payment terms, confidentiality, and other important stuff are outlined in a contract. But disputes often arise over the stipulations of the contract. To avoid that, blockchain technology could be used to produce things called “smart contracts.”

Smart contracts would have instructions embedded in a transaction so that unless the instructions are fulfilled, there is no payment. This ensures all parties are happy and that no one is having to chase people for payment, virtually eliminating payment disputes.

How does the blockchain technology also come into play? The smart contract is visible to all users in the blockchain, so there’s no question about what the terms are and what instructions need to be followed.

What did the government say about AIDG’s vision

The government through the Ministry of ICT said it is determined to support AIDG’s initiatives in any way it can. Obviously, the support can only be expected in the regulation realm (conducive regulation) and not in the financial realm as our government doesn’t seem to be interested in investing in startups. The often-touted Public–Private Partnership which should be a gateway for the government to invest in startups is currently in the doldrums. Only in the regulation real is where startups like AIDG should expect the government’s support. The government would have to get rid of their resilience and skepticism to nascent technologies. Resilience and skepticism for blockchain are borne out of negative connotations of cryptocurrencies. That’s when the Reserve Bank of Zimbabwe (RBZ) is needed to convince the government on the benefits of blockchain.

What RBZ is saying about blockchain

All our hopes of seeing blockchain technology going online hinges on the RBZ. The central bank personnel at yesterday’s conference said it has set up a task force to investigate the pro’s and con’s of this technology and come up with recommendations afterward. Accordingly, we expect a report from the central bank anytime. The RBZ said the taskforce workload is not limited to investigating the blockchain technology but to other technologies like regtech, suptech etc.

3 thoughts on “Africa Infrastructure Development Group: A Zim Microsoft-Linked Startup Is Set To Change The Construction Industry With Blockchain”