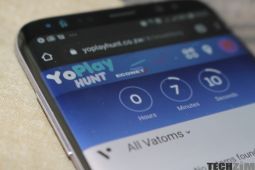 Econet’s Yo Play Treasure Hunt is a pretty intriguing way to giveaway prizes. Whilst I won’t get ahead of myself and call it the most interactive giveaway we’ve seen locally, from a tech perspective it can be argued to be exactly that.

The idea of using just your smartphone and a web browser to go on a treasure hunt is extremely fascinating and the fact that a 250MB data bundle is enough to go on the hunt means there aren’t many barriers for those interested in playing. Is the experience as seamless in the real world? Well, I fired up the YoPlay Treasure Hunt website on my phone and set out to get answers and hopefully some treasure.

First was choosing which treasure to pursue, with the nearest choices being either Westgate or Avondale. I went with Westgate (because it’s closer to where I stay and I could come back and write this piece quicker).

At this point, it’s important to note that YoPlay Hunt prizes are redeemable during specific times (12-2 pm & 4-6 pm). I arrived at Westgate at 1:20 pm as the second screenshot above proves – well within the advertised time frames.

I’m not sure why there are specific hunting times but I believe it might be because opening it up for 24 hours would result in the available prizes running out in a matter of days. If that’s the case, I think it’s a reasonable approach to increase the game’s lifespan and the number of people who actually play it.

Anyway, after arriving at Westgate and getting close enough to redeem the prize, I selected the GRAB IN AR option and my camera fired up instantly. I quickly located the box containing the treasure and attempted to pick up my treasure – which I hoped would be a TV I could use in my makeshift gaming setup.

PS: If you don’t want the AR experience you can just pick up your treasure by tapping on the box on the map in your web browser

Instead of a shiny new TV, I got an error message I couldn’t understand:

I was told to activate a session and instructed to buy a session pass. I couldn’t find the options in the Yo Play menus so I went to the nearest Econet shop – which was a few metres away from the prize fortunately. I showed them what was going on and I was informed by one of the agents that the session had actually ended thus I couldn’t redeem anything and would have to try again at 4 pm. Great!

I was also informed that to participate in the Yo Play Hunt I would have to pay a subscription of ZW$1.99 per hunt.

My first hunt ended up being anti-climatic as I walked away from Westgate empty-handed. Even though the execution wasn’t as great as I hoped, I still believe the gamification of such a giveaway is pretty cool and the fact that it gave me a reason to get out of the house and go on this adventure is still something I enjoyed.

Maybe I’ll try again before the 21st of February and I’ll be lucky on my next attempt. My hopes of a makeshift gaming setup are still alive…

Observations from the treasure hunt

Here is the list of locations you can hunt in right now;

Outside of TV’s players can also win cash prizes, EcoCash, airtime, smartphones and “many other things” according to Econet.

7 thoughts on “Econet’s Augmented Reality Treasure Hunt: Fun But Rough Around The Edges”