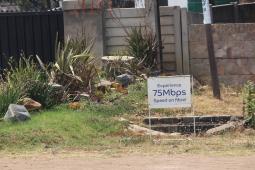 When news broke earlier this week that Dark Fibre Africa had attained a Class B licence from POTRAZ this week, we had a couple of issue we raised in the article and got in touch with DFA as a result. The newly licenced IAP got back to us and provided some clarity which I’ll share below;

Laying down infrastructure before licencing

One of the questions we raised in our initial article was how Dark Fibre Africa had started laying down infrastructure before getting licence. They explained that the laying of the infrastructure was part of a proof-of-concept and was done so using another entity’s licence;

DFA Zimbabwe laid down fibre infrastructure for its POC (Proof of Concept) using another licenced entity with a target to unlocking investments into an open-access metro fibre network. After successfully completing the POC, we applied for, our own Class B IAP License.

At the time when DFA’s project was announced last year, details revealed that they were using Dandemutande’s licence and I believe this is the licence they were referring to above.

What impact will our economy have on DFA?

Another issue I wanted some clarity on is how Dark Fibre Africa will fare in our economy. TelOne and ZOLs service delivery has deteriorated over the last 12-18 months and company executives (from ZOL at least) have blamed the economy for this.

We asked DFA how they would avoid the same fate and simply put, they believe their business model will be sustainable locally;

We, believe, that our business model is sustainable in Zimbabwe as we play our part to meet the ever-growing needs for fast and reliable networks. Our strategy is based on our customers leading us in their network infrastructure requirements. Our value proposition is anchored on the open-access business model.

I’m no economist, but I think it’s fair to expect that in the short to medium term the economy will shrink further due to Coronavirus crisis and that will be another thing for business – including DFA- to contend with.

What does this mean for Zimbos?

Finally, I asked DFA what their presence in Zimbabwe will mean for local businesses and consumers. DFA once again emphasised their open-access model and the fact that access to infrastructure will be offered to Internet service providers (the guys who sell to you and I), mobile network operators, organisations, government and educational institutions on equal terms.

From their view this will result in a market where “large and small players can compete more equally”. DFA also believes the model will result on players focusing more on competing services and customer experience “rather than on network infrastructure.”

This is an interesting stance because Liquid Telecom which owns ZOL has complained about the cost of maintaining network infrastructure and DFA’s stance suggests ISPs buying and reselling their bandwidth will not face the same headache. Their headache will be to provide a great experience instead.

DFA reps we spoke to also made it clear that the company’s entry into South Africa had a positive impact on the broadband market;

DFA’s entry into the South African market made it possible for many connectivity providers to offer high-quality connectivity to their customers without large capital expenditure or the ongoing maintenance burden.

It’s important to note that DFA is the second largest fibre-network company laying 13 000 KM of fibre since its inception in 2007 – and are therefore a significant player in the region.