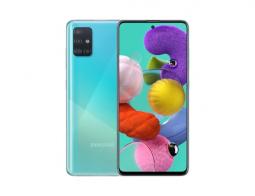 Samsung has a very good line up of midrange smartphone. The A30, A30s, A50 and A51 are all very good. They have, I think, plenty of horsepower and perform well in a number of categories.

Following up the review of the A30s I did last month. I had a little bit of time to play around with the A51. This phone sits near the tip of Samsung’s mid level phones and felt like an upgrade on my A30s in some respects.

The A51 was the third best-selling smartphone overall in Q1 of 2020. The A51 however grabbed top spot as the best-selling Android smartphone in Q1 moving around 6 million units. Samsung had 4 phones in the top 10 overall with the AO1, A10s and A20s joining the A51 in the rankings.

The feel isn’t that much different from my A30s. It has a similar plastic design with a glossy finish and very small bezels. The plastic doesn’t in any way feel cheap. It’s a slim and sleek design, but the finish does attract fingerprints so a case is definitely something to invest in.

The screen real estate was similar to my eyes, both the A51 and the A30s have similar dimensions. The only difference between the two is the A30s has a notch and the A51 has the front facing camera surrounded by the display.

I personally prefer the punch hole style front facing camera because sometimes it feels as though the notch gets in the way.

The A51 has Samsung’s Super AMOLED display. I’m falling for the AMOLED displays, because the colours are so vibrant. Selecting wallpapers used to be something I’d do every so often but now I feel like I’m curating some sort of art collection.

You can forgive me at this point because my upgrade to the A30s came only recently. I haven’t yet gotten over marvelling at AMOLED displays.

The screen is very responsive and all the menus I cycled through transitioned seamlessly. Video playback was also something that I enjoyed on the A51. The notch on the A30s is definitely more obtrusive than the punch hole selfie cam setup on the A51.

The screen also comes with a fingerprint sensor, the response time between the A30s and A51 isn’t that much different. The sensor is reliable and setup is easy enough.

The A51 comes with the Exynos 9611. I must confess that I am not really a mobile phone gamer. The controls are something that I am not a fan of, I much prefer a conventional controller with buttons. But to all those who like mobile gaming the A51 is a competent package.

The phone is quick and responsive and I didn’t have anything to complain about.

The phone has a number of memory variants:

The A51 comes with Samsung’s One UI 2.1. Its similar in a lot was to Android 10, so anyone switching from Android 10 (or any other version) won’t have too much trouble navigating the user interface.

Like most of Samsung’s midrange phones the A51 comes with a 4000 mAh battery with a 15W fast charging wall plug. The battery life is very impressive. It’s about the same as the A30s I have, requiring a charge per day depending on your usage.

It records video in UHD 4K at 30 frames per second. All in all a very impressive setup for a midrange phone.

Samsung’s A51 is a pretty competent package. It does everything you would need if you are a casual user but it can hold its own in the lower threshold of heavier demands. It’s a really good daily driver.

Now if you want something that is the similar at lower price point you could check out the A30 or the A50 both available in Techzim’s Market Place.

If you are looking for something with a little more horsepower you can check out the Galaxy Note 9.

I know at this point I may be sounding a little bit like a Samsung fanboy but, I am very impressed with their offerings especially in the midrange.

5 thoughts on “Samsung A51 review, the best-selling Android smartphone of Q1 2020”