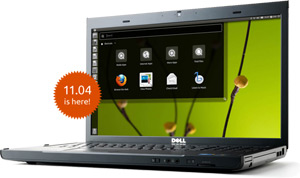 This latest version, named ‘Natty Narwhal’, comes with some changes including a move from OpenOffice.org to LibreOffice as the default office suite and a new desktop environment called Unity which, until now, was only used on the Netbook edition. The Ubuntu netbook edition itself has been merged with the desktop edition.

Normally, to get the latest Ubuntu locally, you would just download it from the Yo!Africa repository, but we’re seeing the local Ubuntu website is down, so maybe initiating download from Ubuntu.com and letting it choose the closest mirror will do.

The Zimbabwe Ubuntu LoCo team organizes release parties each time a new version comes out, but seeing the local Ubuntu website is down, we’re not sure if any party announcement has been sent out this year. We’ll check with them and update if there’s anything.

Parties aside, highly usable (as in point and click the Windows way we’re all used to) open source operating systems like Ubuntu remain the hope for computer users in countries like Zimbabwe, where ordinary people are not likely to fork out to buy the commercial (but ubiquitous) Microsoft Windows. It’s a known fact, software piracy especially that of Microsoft Windows and Microsoft Office is rampant in Zimbabwe.

The next Ubuntu version is scheduled for release later this year in October.