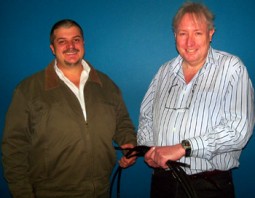 After last week’s announcement of Utande’s connection to the SEACOM undersea cable along Zimbabwe’s border with Mozambique, we visited the company for more information. Prior to this, efforts to get even the slightest of a whisper from Utande were mostly unsuccessful, apparently due to acquisition negotiations with now majority shareholder, Masawara plc. We were thus glad to meet Colin Franco, the company’s chief technical officer, and Russell Clinton the Utande CEO, for a discussion and tour of the Utande data centre.

We had time to talk to the two gentlemen about the Utande’s early operations, its current business, it’s data centre here in Harare and of course, the SEACOM connection.

As you may already know, Dandemutande (Shona for Spider Web) has been around for some 15 years. The company was founded by its current management in 1996 as an ISP reselling TelOne (then called PTC) dial-up and leased line Internet services. Not too long after founding, the startup bagged an enviable corporate giant (Delta Corporation) that demanded its undivided attention.

Back then Delta encompassed not just the beverage operations but also included Pelhams and African Sun (then known as Zimbabwe Sun). The young Utande set up and ran the company’s national Wide Area Network (WAN). According to Collin the system they operated for Delta was at the time the most advanced network of its kind nationally, encompassing depots and commercial properties Delta operated.

From then on Utande conceived and maintained a unique approach of doing business; the company managed its growth to only serve a bouquet of corporate clients. According to Russell this approach was necessitated by their main principle on providing Internet services: “We don’t believe in contention”. to deliver on their promise and to never compromise the quality of service. Perhaps a measure of the effectiveness of this approach is reflected by the fact that they still count Delta Beverages (Zimbabwe’s most valuable company by market capitalisation) as a loyal client to this day.

When Zimbabwe’s economy was under severe stress, Dandemutande applied for and got a Internet Access Provider (IAP) licenses from the country’s telecoms regulatory authority, POTRAZ. Apparently, Dandemutande was the first provider to be awarded the IAP Class A license on 13 July 2009. Furthermore, the company began negotiations with SEACOM long before the Masawara’s acquisition when it was approached by the South African Shanduka Group to plot a way forward. Shanduka owns 12.5% of SEACOM.

Utande’s culture of operating under the radar could very well be over as they are scaling to levels that are simply too high to ignore. To begin with the investment from Masawara formulated many a headline, and numerous more behind the scenes developments will cast the spotlight on it. Chief among them is the fact that the SEACOM link is now fully running. Along with Africom, the company’s direct link to SEACOM (as previously reported) places it in a “driving seat position”. This has availed much greater capacity and necessitated a more aggressive business thrust.

Techzim believes that the company’s success will not be a question of capacity but one hinged on its ability to come out of its shell. This would require it to strike a balance between delivery and a holistic marketing effort. In essence it would have to maintain its culture of delivery and blend that with an intelligible communications strategy.

The company is now in the process of repositioning itself firstly as an enterprise Internet access provider and secondly as a value added services (VAS) enabler. What this means in terms of Internet access is that they are seeking to provide high capacity services to companies, regardless of which last mile provider they have. With a lit fibre capacity of 620 Mbps (equivalent to 1 x STM-4 circuit).

Concerning value added services; Utande is investing in new infrastructure and a skills base enabling it to provide server co-location and cloud based facilities for businesses and and third party Internet hosting resellers. The company is in a position to serve local startups, small to medium companies, large ones, ISPs, and even other IAPs. Its alliance with Dimension Data and Cisco as strategic partners has placed it within reach of becoming an important part of Zimbabwe’s ICT value chain.

Utande also indicated an interest to lure back skilled Zimbabweans into the country for deployment in the data centre operations and other areas. A separate division addressing the needs of ordinary consumers (through Wimax) is set to be introduced in future.