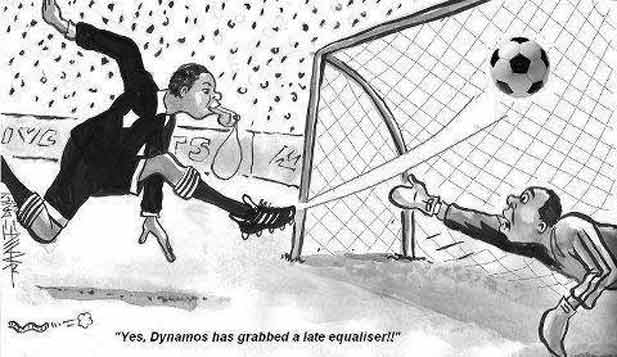 It has been a busy week in football as the 2013 season draws to a close and various teams fiercely competed for different accolades both at the local and international scenes. There were accusations of biased referees, offside goals that should have been disallowed, players biting each other, players diving to get penalties, some throwing balls at one another at some high level tournaments. This led me to think about the case for using technology in the officiating of football matches as has been done in other sport for a while now.

The argument has been going on for so long now in the world of football between traditionalists and modern day perfectionist regarding the role, if any, technology should play during football matches. Traditionalists in the form of Sepp Blatter and Michel Platini have consistently argued against the use of tech and being in position of power have thus far successfully upended efforts by others to introduce technologies like goalline technology.

Tight offsides, dubious goals, racism and violence in blind spots of the pitch, missile throwing and supporters haggling players, handballs, bookings etc… all make a case for technology. Most of time the match officials’ eyes are on the ball and their attention is normally confined to those players who are in the vicinity of play. Some players like Liverpool’s Luis Suarez have now made it a habit to capitalize on these blind spots. He was found guilty of racially abusing another player and recently bit another on the arm. There are certain laws which prevent a referee from retrospectively issuing a card to a player if he or his on field officials did not witness the event. This is despite the advances in technology that can instantly provide evidence of the report, witnessed or not.

The traditionalists’ argument has been that the use of technology will lead to frequent interruptions in play as officials consult various technologies to verify a decision. Whilst this would be true if excessive reliance were to be placed on technology, this does not explain why FIFA has not accepted technologies that do not require stoppage of play to work for example goal line technology. This gives credence to the allegation that at least some of their reluctance is rooted in the fear of change, rather than actual logic.

In cricket various decision making tools have existed under the auspices of the Decision Review System. DRS as it is known, is not used to supplant the umpire, the equivalent of a referee, rather it is used to aid his decision making and in eliminating howlers-obviously wrong decision making. The system is otherwise ignored during play and it is only used in two instances: when the umpire is not sure in a critical marginal decision or when an aggrieved player formally appeals. Given that players are likely to be tempted to appeal every time a decision goes against them each team’s appeals are limited to two. Whenever a player’s appeal is unsuccessful the team loses an appeal. This is meant to discourage frivolous appeals and prevent needless disruption of play.

A similar system could be designed and implemented in football where an appeal by each team is limited to one appeal which can only be instigated by the captain. The team would only lose the appeal if it was unsuccessful. Officials could also be allowed to consult a replay for example to determine if a player dived or confirm a score was not actually an offside. Steps need to be taken however to make sure that this is not habitually done to the detriment of the spontaneous nature of the game.

Like with DRS, which the Indian Cricket Board dislikes, technology has its disadvantages. Poorer football associations like ZIFA which have a shoestring budget might not be able to afford it. Also there are different types of technology which serve the same purpose  it would be difficult to determine which to use. For example there are two very different goal line technologies which have been proposed. FIFA could mitigate these problems by funding the purchase of technology and providing a standard to be adopted when choosing which technology to adopt. There is also a very real risk that play would be significantly delayed if a perfectionist referee were to overly consult the technology.

As the Indian cricket board has pointed out, the technology itself is not a 100% accurate as the use of DRS in cricket has proved. Sometimes these inaccuracies stem from the fact that human interpretation of the results is often necessary even if technology is used. For example when making a marginal offside decision it can be difficult to make the call. In cricket this has been solved by saying the original decision stays for instance if the referee had decided it was a goal and technology cannot conclusively prove it was an offside the goal remains. The unfortunate result is the team loses its appeal as well. This could result in the team being unable to appeal an obviously wrong decision.

The debate about technology in football will probably go on for a long time but in the meantime the implementation of technology could be piloted at smaller events so that its usage could be perfected for the future adoption in the premium games. Technology can be advantageous and desirable provided a way is found around some of the problems its implementation might bring.

4 thoughts on “A case for technology in football”