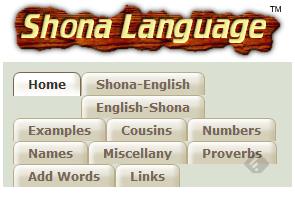 What is the Shona name for a ‘honey badger’? Or the Shona words for the number 10,000? Or how about the other way; how many Shona speaking people reading this know what a mhumhi is? I bet less than half! It’s even worse if, like me, Shona is not their first language.

If you’re one of those people that have no idea what the answers are, there’s a site that can help you know more Shona, and it’s called Masumba.com. Set up by a guy called Martin Shumba, the site’s primary objective is to create a “good reference for the Shona language as spoken in Zimbabwe.”

We loved that the site is not in a dictionary format that forces you to enter words from your head to find their meanings. You can just browse through the site for common words, numbers, animals, proverbs etc… This is great for someone that just wants to learn even when they don’t have specific words to look up.

As for the reason he’s doing this, well, Shona, like many vernaculars around the world, is considered uncool by the younger generations, who prefer English, French, Portuguese and other such. His words:

Indoctrination by colonialists has led to the general mindset of the average Zimbabwean that it is uncivilized to speak in these dialects. It is for this reason that some Shona people are ashamed to speak in vernacular in public.

According to the site, it has been running since 2004. We just wish someone would build a site to do the same thing for the Ndebele language, which is also widely spoken in Zimbabwe, especially in the Matebeleland province.

13 thoughts on “Mashumba.com will help with English to Shona translations”