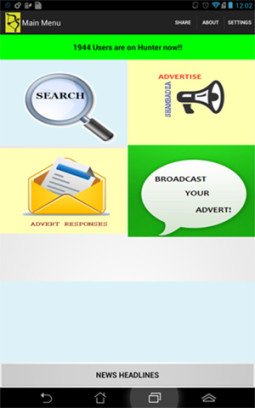 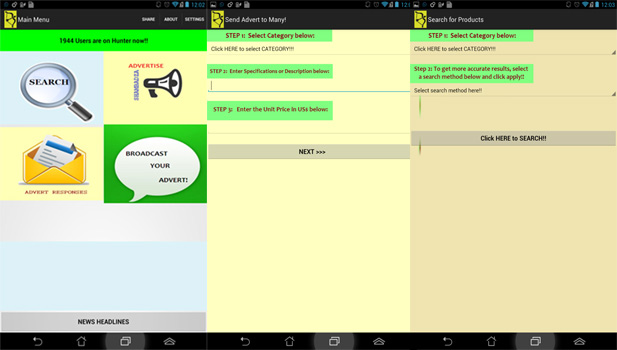 The recently held Computer Society of Zimbabwe meet up for the Harare Chapter had a focus on emerging ICT entrepreneurs and how these guys are playing a part in the economic turnaround of the economy. One of the presentations that resonated with these themes was made on an virtual market and IM application called Hunter.

The Hunter app is a product of Logical Systems, a startup founded by Tinashe Kujoka and Kudzai Gwasirai. Their team specializes in the Research & Development of both mobile and computer applications and databases for both individuals and companies. Other projects they have worked on include the Drive Safe driving school app.

We spoke to Kujoka about his work regarding the app as well the efforts his startup has been making in adding value to the startup and SME ecosystem. The Hunter app is an advertising platform with an Instant Messaging component. A desktop and Android version of the app are available for download on their website.

According to Kujoka, the Hunter concept was inspired by the widespread adoption of social networking and Instant Messaging platforms such as WhatsApp, Viber and Skype as advertising and marketing platforms.

In an environment where small scale entrepreneurship is common, free communication platforms that can be used as advertising platforms give anyone trying to push their product a cheap channel to broadcast product or service info.

This can be annoying to the average IM app user that wants to just communicate with people cheaply without being told to contact so and so for special offers on cakes, weaves or laptops. Kujoka decided to create a platform dedicated to classified advertising with an integration of an Instant Messaging service between the sellers and potential buyers.

Hunter is mainly aimed at providing cheaper advertising and marketing services as compared to the existing platforms which are not affordable for the small enterprise and one time seller.

This is supported by fast, interactive and cost effective communication between advertisers and potential clients through the inbuilt Instant Messaging platform, which challenges the traditional advertising and marketing platforms like newspapers which do not offer direct instant feedback. 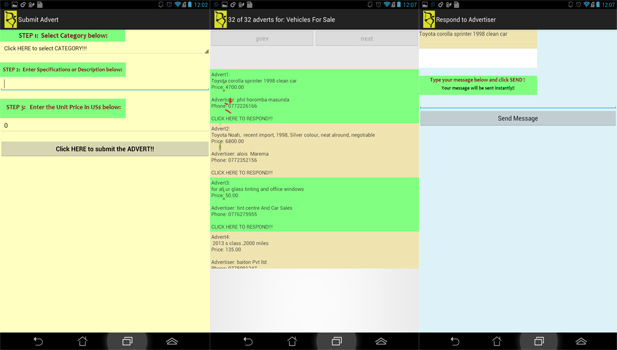 Another selling point for Hunter is the direct link or access to potential clients for individuals or companies, thereby avoiding middlemen or sales agents who would normally prejudice both parties through sales commissions.

For example if one is selling their vehicle, they can quickly locate interested clients by simply broadcasting an advert on Hunter and wait for responses, as opposed to engaging a car sales agent or middlemen who would demand a sales commission.

In terms of monetising the app, Kujoka said it will be offered as a free download with revenue being generated from components such as the app’s broadcast option that allows users to send product notifications to a specified number of hunter users. There is also advertising through banners on the app.

While this app is offering a service that is new to the Zimbabwean market in terms of the integration of IM with advertising, there will be competition from other providers of classifieds services. It will be worth watching how Kujoka expands the community of the Hunter app users which is key for effectiveness in the ads and virtual market arena.

Having been in beta mode since January 2014 and with a measured response from the market Kujoka says their bootstrapped initiative is aggressively seeking funding from any investor who is willing to help them realise the full potential of their product.