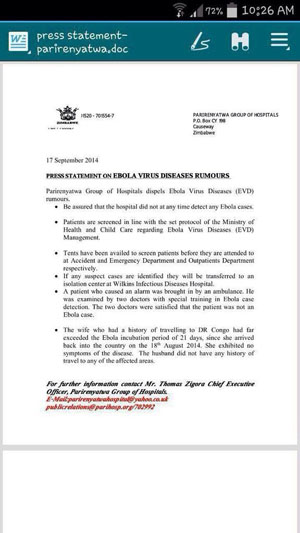 The threat of Ebola is real, something that explains the panic that grips anyone who thinks its in their backyard.

Luckily the virus hasn’t made its way into Zimbabwe, but some people had taken to social media to say otherwise. There was a WhatsApp message that was circulating yesterday that was warning people in Harare that a case of the Ebola virus had been identified at Parirenyatwa Hospital.

It turned out to be a mix of panic, misdiagnosis and (dare i say) social media virality. Parirenyatwa Hospital officials took to electronic and print media today assuring people that there’s no Ebola in Zimbabwe.

A suspected Ebola case that was safely ruled out as some other condition was probably picked up by someone in the vicinity, sent to a couple of WhatsApp groups which took it as info from a credible source at the scene, and 10 hours later people weren’t shaking hands anymore. 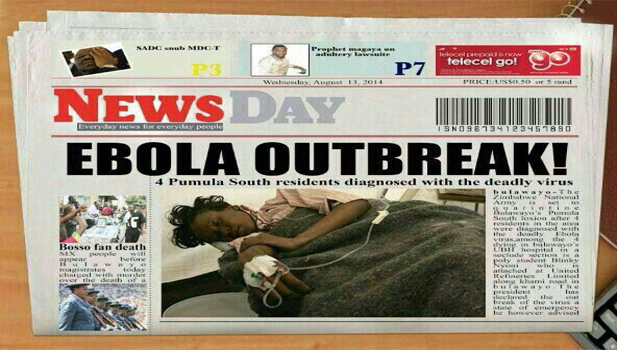 There have been other false scares before. There was one in Bulawayo early this month, plus a falsely edited newspaper article. Outside Zimbabwe false alarms have been raised in India and Namibia where the tourism has been affected by the false alarms.

There’s a positive side to all of this though. The power of the internet to spread false information can also be used to set the record straight. Parirenyatwa Hospital’s official statement has been shared via WhatsApp enough times today.

This just goes to show that a dedicated website with information on this would have been helpful as a precaution. Or perhaps a medical alert app?

15 thoughts on “Is there Ebola in Zimbabwe?”